By Anel Adilbayeva in National Overview on 24 April 2013

ASTANA – Students from several universities in Astana have volunteered to help the police on a regular basis. And already these teenage Sherlocks have helped to solve hundreds of offences. 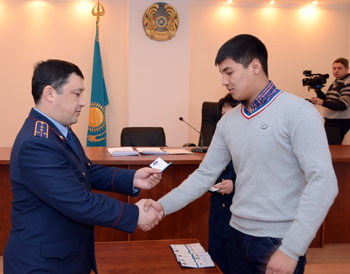 In a practice restored from the past, young volunteers are now helping police patrol their own campuses and ensure law and order.

The Department of Internal Affairs (DIA) of the city government has launched a new volunteer programme to recruit ordinary citizens as part time auxiliary police officers. Since February 2013, 87 university students have joined it. They are paid 15,000 tenge ($99.20) but there is no strictly defined payment date, the amount could be paid monthly, quarterly etc.

So far, since April 1 of this year, these volunteers and non-student volunteers who were also recruited have helped to solve 332 offences.

In February, Astana DIA officials met with officials from nine higher educational institutions in the city to discuss the involvement of students to help in public law in accordance with the Law on the participation of citizens in the maintenance of public order. The legislation is being used to increase legal awareness of young people and foster respect for the laws of the country.

The programme is not limited to students. Some 21 retired police officers and 136 concierges have also joined it. Another 88 members of security agencies participate in their spare time.

The programme is working. In 2012, its volunteers helped to report or solve 184 crimes and 5,871 administrative offenses. Since the beginning of this year, another 39 crimes and 1,412 offenses have been reported. In 2012, the Astana DIA rewarded some of its volunteers with 13 million tenge ($86,980) in reward money. 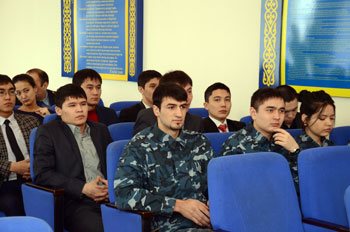 Ramazan Abilov (c), a student at Kazakhstan Agriculture and Technology University, is one of the best volunteers working to preserve order on his campus.

Some 27 of the student volunteers come from KazATU. The police prefer to recruit students who have successful sports backgrounds.

Ramazan Abilov, a first year student at KazATU, is one of the volunteers told The Astana Times about his service.

“We usually work in the university, where we investigate all the violations we discover,” he said. “They are usually petty offenses such as smoking, consumption of alcohol, appearance in the university or in residence hostel drunk, and fights. The KazATU campus is very large. Fights often occur in public places.”

Abilov does not work alone. “I am part of a team of eight people,” he said. “We work in shifts. We always wear uniforms on duty. We work every day and we are having a deterrent effect. Students are stopping smoking or appearing drunk in hostels. We are making progress.”

Another volunteer, Anuar Nurgaliyev, is a second year student. “I like my job,” he said. “I dreamed of becoming a community volunteer. I actively take part and try to do well. The young people we deal with learn to behave better and they respect our work.”