By Maral Zhantaykyzy in Culture on 17 April 2013

ASTANA – On April 10-11, a Japanese Spring Arts Festival was held in Astana. 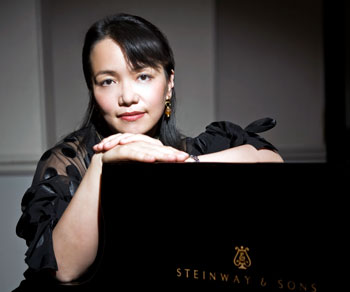 In 2010, Shirasaki won international acclaim with her album “Falling Leaves – Live in Hamburg.” She founded the Sakura music school in New York City and gave a master class for young Kazakh musicians.

Master of sand art Catherine Jackie has created a breathtaking background for the beautiful music, the audience saw the blooming sakura, the boat on the water surface, a Japanese hut on a shore.

The festival celebrated the annual National Cherry Blossom Festival which is being held in Kazakhstan for the fourth consecutive year.

On April 19, the Japanese cultural festival will move to Almaty with events celebrating the art of origami, calligraphy, kimono dressing and kirie (the Japanese art of paper cutting).Sakura blossoms will be in bloom in the city’s Sakura Alley.

In March, the 13th Japanese Film Festival was held in Almaty and an oratory competition in Japanese was held in al-Farabi Kazakh National University.

Twice-yearly Japanese cultural festivals are now held every year in both Astana and Almaty in spring and autumn. The Japanese Autumn Festival will be held next in November. The festivals are organized in cooperation with the Embassy of Japan, the Degdar Humanitarian Fund and Japan Tobacco International. The festivals have the goal of strengthening bilateral cultural relations, and introducing the people of Kazakhstan to the traditional and contemporary art of the Land of the Rising Sun.