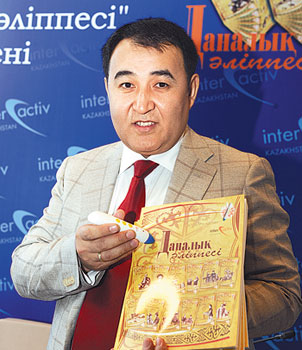 Nuraly Kudaybergenuly believes his “ABC of Wisdom” will be in great demand.

ASTANA – A rather fascinating educational guide “Danalyk alіppesі” (“ABC of Wisdom” in Kazakh) was recently presented at the Kazmediacenter here.

This series include instructions, 12 magazines and an electronic pen. The ABC is a new word in the Kazakh science and was developed by the team of Interactiv Kazakhstan company headed by the author of the project Nuraly Kudaybergenuly. Its uniqueness is in fact that the book can be read, or listened to. Both texts and music are performed by the best artists once you apply an electronic pen to the page.

President Nursultan Nazarbayev, in his introduction to the book said, “I believe that, having been developed on the basis of innovative technologies, “Danalyk alіppesі” will expand your horizons, develop your speaking skills through precious heritage of our nation, and will become a valuable tool for your spiritual enrichment.”

Nuraly Kudaybergenuly demonstrated to the audience the possibilities of their creation. Silent pages spoke and sang on the touch of a magic pen.

According to the author, the book is made in accordance with the latest technology that allows reading out a special code printed on paper which is similar to the cash tape used in the shops at clearing and settlement operations. 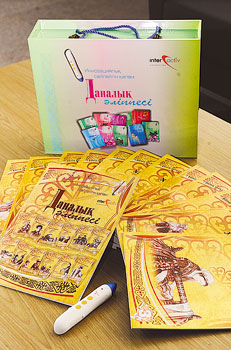 “There are only two authors of this technology, one in Japan and one in Thailand,” said Nuraly Kudaybergenuly. “I personally met with the Japanese scholar and received a license for the use of this know-how in Kazakhstan. ‘ABC of Wisdom’ includes folk songs, lullabies, tales, legends, epics, covenants of ancestors, music of kobyz and pipe…”

It is planned to voice the classics with implementation of this technology including the famous epic “The Path of Abai” by Mukhtar Auezov.

The new educational guide, released with the print run of 10,000 copies, soon will be available for sale and will be distributed in schools. The cost of one set is KZT 45,000.

Representatives of the Presidential Administration, the Senate of the Parliament and prominent scientists attended the launch of the new book.