By Olga Kazantseva in International on 24 April 2013

TOKYO – Speaker of Senate of Parliament of Kazakhstan Kairat Mami paid an official visit to Japan on April 18 where he meting the head of the House of Representatives of the Japanese Parliament, Bunmei Ibuki and other officials. 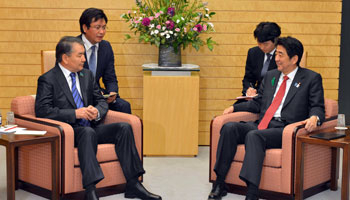 During the meeting in the Japanese Parliament, Ibuki said that since independence, Kazakhstan has achieved high rates of economic development and has taken a leading position in Central Asia. He called for the expansion of bilateral cooperation and the intensification of inter-parliamentary relations.

Speaker Mami in turn noted the importance of interaction between parliamentarians, particularly in the exchange of experience and strengthening the legal framework of agreements reached at various levels.

The sides also exchanged views on the development of international dialogue and other relevant topics.

“I am sure that Kazakh-Japanese cooperation has great potential. New long-term projects that are planned in Kazakhstan, of course, will be interesting for business and public circles in Japan,” Speaker Mami said at the opening of the Kazakh-Japanese forum.

The importance of Peer Relationships

The programme of official events began with the meeting of Mami and his colleague, Speaker of the Upper House (House of Councilors) of the Japanese Parliament Kenji Hirata. Recently, the Parliamentary League of Friendship with Kazakhstan, consisting of about 40 Japanese MPs, members of both Houses of Parliament from various political parties, was created. Members of the league regularly meet to discuss the status and prospects of bilateral cooperation and, depending on the agenda of the meeting, invite representatives of relevant ministries and agencies in Japan to participate.

An important role in the formation of this vector of cooperation belongs to former Prime Minister of Japan and well-known politician of the Liberal Democratic Party (LDP) Ryutaro Hashimoto.

During his presidency in the League of Friendship from 2002 to 2006, Hashimoto initiated a new foreign political concept in Japan under the name of “Eurasian diplomacy.” Its implementation contributed to the promotion of bilateral collaboration with Kazakhstan and other Central Asian countries. This constructive approach to the work of the league is still supported today. After the recent parliamentary elections, its composition was substantially renewed.

According to Speaker Hirata, Kazakh-Japanese relations are characterised by friendship and cooperation in various fields.

The confirmation of this is the completion in February of this year of a draft agreement on liberalisation, encouragement and protection of investments. At present the document is being prepared for official signing. Speaker Hirata expressed confidence that the adoption of the agreement will increase and intensify investment and humanitarian exchange between the two countries. Inter-parliamentary cooperation will contribute to the same purpose, he added.

Speaker Mami concurs with the idea that parliamentary cooperation will strengthen all-around cooperation and said that a visit to Kazakhstan by leaders of the Japanese Parliament could give a new impetus to cooperation.

Evolution of the Partnership

The status and prospects of Kazakh-Japanese relations were discussed at a meeting between Speaker Mami and Japanese Prime Minister Shinzo Abe.

The head of the Japanese government conveyed his best wishes to President Nursultan Nazarbayev of Kazakhstan and stressed that Kazakhstan is an important partner for Japan. He also said that he would make every effort to strengthen bilateral relations and called for further promotion of inter-parliamentary relations as a significant component of successful collaboration.

In turn, Mami noted that Kazakhstan considers Japan an important partner in Asia and aims to develop the strategic partnership in all areas.

It’s worth mentioning that the close positions of the parties on the key issues of international security are contributing to the evolution of the Kazakhstan-Japan partnership. Tokyo welcomed Kazakhstan’s accession to the Treaty on Non-Proliferation of Nuclear Weapons, highly appreciating the initiatives of Kazakhstan in international and regional organisations. It is symbolic that Japan has become a cosponsor of the U.N. General Assembly’s resolution proclaiming August 29 as the International Day against Nuclear Tests. In turn, Kazakhstan has consistently supported Japan in its election as a permanent member of the U.N. Security Council. Tokyo supports the initiative on the Conference on Interaction and Confidence Building Measures in Asia, and is officially involved in the forum as observer.

No less important is the participation of Japanese spiritual leaders in the Congress of Leaders of World and Traditional Religions held in Kazakhstan’s capital, Astana. Last year, Tsuneki Tanaka, the president of Jinja Honcho, the Association of Shinto Shrines, was elected a member of the Council of Religious Leaders during the fourth spiritual forum in Astana.

One of the most recent examples of approval by Tokyo of Kazakhstan’s international initiatives is the statement made by the Japanese side to support Astana’s bid to host the international specialised exhibition, EXPO 2017.Prime Minister Abe earlier also stressed that Kazakhstan highly appreciates the assistance of Japan in overcoming the environmental and social consequences of nuclear tests in the Semipalatinsk region, as well as the rehabilitation of the Aral Sea. No less important is the support of the Japanese government in the process of building and upgrading major infrastructure in Kazakhstan.

The dynamic political dialogue between the two countries is confirmed by healthy, pragmatic economic relations, which, according to experts, have achieved a breakthrough in the past few years as a result of enhanced cooperation in the industrial, energy and financial sectors. The signing in 2007 of a joint declaration on strengthening the strategic partnership in the field of peaceful nuclear energy, as well as more than 20 agreements between JSC National Atomic Company Kazatomprom and leading energy companies in Japan, allowed Kazakhstan access to advanced technologies in the nuclear industry and increased the share of Kazakh uranium products in the Japanese market, including high added-value products.

The visit of President Nursultan Nazarbayev to Japan in June 2008, during which the parties identified new paths and prospects for economic partnership, gave a powerful impetus to bilateral cooperation.

Positive relations contributed to increased trade, economic and investment cooperation, intensified visits and contacts at various levels between ministries and agencies and the business community of both countries and helped to increase the interest of Japanese financial institutions in the Kazakhstan market.

Today, 26 enterprises using Japanese capital are working in Kazakhstan in oil and gas, metals and mining, finance, automotive, telecommunications and other industries.

New perspectives for cooperation have opened up to Japanese investors in connection with the guidelines of Strategy Kazakhstan 2050, which was presented during the current visit of Speaker Mami to Japan, at a forum organised by the International Council of Friendly Exchanges in Japan and the Embassy of Kazakhstan. The event aroused great interest among representatives of Japanese business circles.

Mikio Kurokawa, son of the famous architect Kisho Kurokawa, the author of the general development plan of Astana, said that he was happy and proud to continue his father’s work with the new emerging opportunities in Kazakhstan.

“I sincerely hope that the company, which has now been entrusted to me to lead, will contribute to the development of infrastructure in the capital of Kazakhstan. Of particular interest to us are the prospects of the future construction of an innovation cluster based in Nazarbayev University,” said the president of the well-known architectural and construction company that bears his father’s name.

An optimistic forecast on the investment activity of the Japanese capital in the implementation of strategic plans in Kazakhstan was voiced by the first ambassador of Japan to Kazakhstan, Akira Matsui.

Winding up the official trip to Japan, representatives of the Kazakh delegation Chairman of the Agency for Religious Affairs Kairat Lama Sharif, Senators Erlan Nigmatulin and Lyazzat Turlashov visited the headquarters of the Shinto Shrines Association, where they met with Tsuneki Tanaka.