Kumis, a mildly alcoholic drink made from fermented mare’s milk, is the popular national beverage of Kazakhstan. Now experts are working to make it an export success in Europe as well. 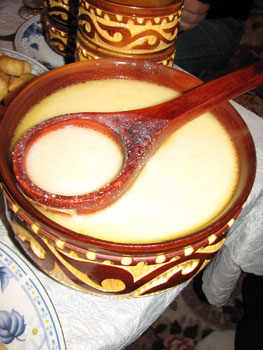 Kumis, the Kazakh national drink, is thought to have numerous curative qualities.

Kumis has been widely known since ancient times. Avicenna (Ibn Sina), the 11th century great philosopher and physician praised its therapeutic effects a thousand years ago. Today, the beverage is enjoying a new wave of interest across Europe and it is being brewed in Germany, Austria, Italy, Belgium, the Netherlands, Ukraine, Mongolia and Yakutia in Siberia.

Kumis has significant nutritional value and a pronounced antimicrobial effect thanks to the presence of antibiotic substances produced by microorganisms during fermentation. Its combination of alcohol, carbon dioxide and lactic acid excites the activity of gastric glands and improves digestion. Its antibiotic substances boost resistance to infection and its lactic acid bacteria create favourable intestinal micro-flora.

The dry mare’s milk is first mentioned in the accounts of the conquests of Genghis Khan. The Mongolian conqueror ordered each of his warriors to always carry dried meat and dried kumis in his traveling bag.

Kazakh scientists have developed methods to pasteurize kumis and deep-freeze it.

Professor Urishbay Chomanov of the National Academy of Sciences and National Research Institute (NRI) believes kumis can be converted into tablets and powders for export.

Some experts believe kumis should be stored for at least a year before drinking it. The NRI has developed a new sublimation method using microwave technology to produce seven to eight kilograms (15.4 to 17.6 pounds) of concentrate from 100 kilograms (220 pounds) of kumis. In this method, the alcohol is evaporated from the kumis, but all other useful substances remain.

Kumis made from mare’s milk powder is identical to natural kumis in its taste and medicinal qualities.

Scientists at Asfendiyarov National Medical University have developed a form of kumis in tablet form that makes a natural healing drink after being dropped in a glass of mineral water for an hour with similar qualities to aspirin. But it is still far from the production stage.

Freeze-drying kumis has been developed in Germany. This freeze-drying, or lyophilization process, takes place at low temperatures of minus 40 to minus 70 degrees Centigrade.

This technique was pioneered by Rudolf Storch in 1959. He learned its basic principles from an old Kazakh peasant when he was a prisoner of war in a Soviet prison camp. He started milk production in the Laar district of Germany with five Gafling-breed mares to produce kumis for patients at a sanatorium and started the first production of mare’s milk in Europe.

Brack Zollmann was another pioneer of the treatment. After World War II, he too spent many years at the Karaganda Corrective Labor Camp (Karlag) as another German prisoner of war. When his term ended, he was dying of tuberculosis, and probably would have died if a Kazakhshepherd had not treated him with kumis. Zollmann then opened a kumis farm with 400 horses. Today, his children are successful horse breeders. They also manufacture popularcosmetics with mare’s milk in their products.

The Zollmann farm in the town of Waldbrunn in the Odenwald mountain forest is the largest and oldest kumis factory in Germany. Brack’s son Hans married the daughter of Rudolf Storch and today they run the Kurgelstut Hoher Odenwald Company.

According to Hans Zollmann interest in the curative properties of kumis grew in the 1960’s after scientists discovered its positive effect in the treatment of lung diseases, digestive problems and weakened immunity.

Zollmann said kumis is best taken from horses raised in a natural and organic environment, without the use of chemical fertilizers.

Zollmann’s products include dry concentrate additives for baby food, cosmetic products, bactericidal body lotion, soap, shampoo and shower gel, all using kumis substances. His family drinks mare’s milk every day to ensure the quality of the product. Today there are 30 to40 farms in Germany that produce and sell kumis.

Aytugan Mukashev, Ph.D., an agricultural consultant for the World Bank said Japan too is interested in dried milk based on kumis.

Mongolian scientists have developed a new mobile kumis manufacturing machine that produces the fermented beverage in a single procedure using a mini-computer. Kumis powder is poured into the device and it is then automatically mixed with water and decanted into plastic cups.

The Mongolians say the Kazakh sublimation method to dry freeze kumis is too expensive, because the dehydration process requires energy and therefore increases costs.

KAZNEX Research Director Raushan Kazbekova believes powdered kumis is not a realistic export product. Kumis and shubat, (fermented camel’s milk) are listed as dairy products like yogurts and still have not been accredited as distinct items for sale.

Nursila Akhmetbekov, president of the Sarzhaylau kumis centre said the first step in this process would be to register a brand of kumis as a distinctively Kazakh beverage, comparable to Swiss cheese, Irish whiskey and Italian spaghetti for the global market.

Akhmetbekov said the product had a potential export market worth millions of dollars. He said a ton of kumis can be produced for one third the production costs of the same amount of oil. But it could generate five or six times higher profits.