ASTANA – On April 10, President Nursultan Nazarbayev addressed the Entrepreneurs Council in Astana during a session dedicated to improving the business climate and enhancing competitiveness and announced the creation of a new National Investors Council. 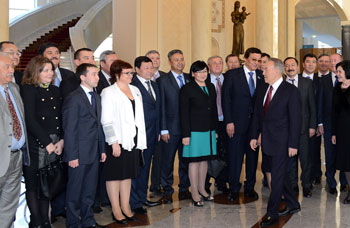 Kazakhstan’s business class has grown wide and high over the first twenty years of the country’s independence, and now wants a bigger say in business regulations.

“It is important to create the conditions for the cooperation of business, especially at the regional level,” the president said.

Nazarbayev said private sector development was a critical component of the Kazakhstan 2050 development plan to make Kazakhstan one of the 30 most economically advanced countries in the world and one of the top financial centres in Asia.

The president said the private business sector should become the main driving force of the economy. The country needed to double its business volume. Another wave of privatisation was essential. The state also needed to quickly develop and implement measures to allow small businesses to grow into medium-sized ones.

The president said Kazakhstan had become an international leader in making reforms to simplify conditions for setting up companies and conducting business. The law enforcement system is being reformed to reduce pressures on businesses. Inspections on them are banned in their first three years of activity. The frequency of tax reporting has been reduced for individual entrepreneurs.

“A strong economy is dependent on the existence of a strong business sector with highly competitive domestic enterprises,” Nazarbayev said. “It is time for business to help the state.” The Entrepreneurs Council will also be transformed into a National Investors Council, he said.

The president discussed the role of the private sector in meeting the challenges of the Single Economic Space (SES) and Kazakhstan’s upcoming accession in the World Trade Organization. He stressed the need to make domestic products competitive and instructed the government to work with the Atameken Union to adopt a joint action plan to promote and protect the interests of domestic businessmen within the SES.

“The country’s legislation should be entirely revised. I have high hopes on Atameken Union activity and it will coincide with the objectives of the Nur Otan political party,” the President said. “We must teach people how to do business. We should teach people first, not every businessman can keep an entire accounting department, a businessman should be taught to work with banks and the state.”

That body is now the leading organization of Kazakhstan’s business community and more than 90 percent of all business associations in the country are members of it. The chamber provides experts to sit on government councils and commissions dealing with business issues and uses its own experts to analyze the drafts of regulatory legal acts. It also organizes unified positions on major economic issues and government policies from the business community.

The Atameken Union is also a member of many international organizations including the World Chambers Federation (WCF), which covers commercial, industrial, economic, marine, stock-exchanges, lands and customs associations, the International Chamber of Commerce (ICC), the Union of Black Sea and Caspian Region Confederation of Enterprises