By Maryam Turezhanova in International on 10 April 2013 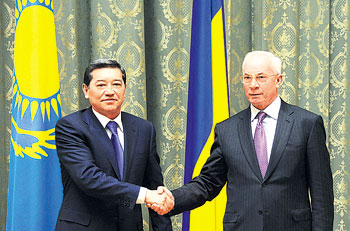 Serik Akhmetov (l) and Nikolai Azarov (r) reached a number of agreements during their meeting in Kiev.

Kazakh-Ukrainian relations have always been good, but are now expanding rapidly. In 2012, bilateral trade totaled $5.5 billion, 24 percent higher than in 2011.

“We are very pleased to visit Kiev,” Akhmetov said. “We have just celebrated the 20th anniversary of establishing diplomatic relations and we continue to maintain stability, interethnic peace and harmony.”

“Ukraine is one of our most important trading and political partners. Largely thanks to the constructive dialogue between our heads of state, Kazakhstan and Ukraine have reached a high interaction plane. We have a lot of common points in economic and trade direction and are willing to work together in energy, transport, and space development,” the prime minister said.

In preparation for the prime minister’s visit, the Kazakh-Ukrainian Intergovernmental Commission for Economic Cooperation held its 11th meeting in Kiev.

Akhmetov and Azarov agreed to launch a cooperation programme between the Ukrainian and Kazakhstan’s national space agencies for 2014-2015. They also discussed closer ties in the oil and gas sector, energy security and expanded Ukrainian business participation in Kazakhstan’s Programme of Advanced Industrial-Innovative Development (PAIID). Akhmetov invited Azarov and Ukrainian businessmen to participate in the Astana business forum.

“The agenda of the talks was extensive and included many issues,” Akhmetov said. “Our countries believe in good prospects for cooperation, and there is sufficient potential for it.”

A cooperation programme was also launched in science and technology between Kazakhstan’s Education and Science Ministry and the Ukrainian State Agency of Science, Innovation and Information for 2013-2017.