By Marzhan Imanbayeva in National Overview on 10 April 2013 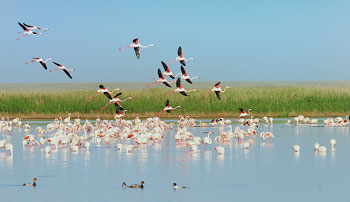 ASTANA – Every April, pink flamingos flock to the heart of Kazakhstan, settling in the Korgalzhyn State Nature Reserve near Astana, where they stay until late fall.

The Korgalzhyn State Nature Reserve spreads over parts of Akmola and Karagandy provinces, about 130 kilometres southwest of Astana, in the delta of the Nura River. It is part of the UNESCO heritage site Saryarka — Steppe and Lakes of Northern Kazakhstan, a Ramsar site and biosphere reserve. The reserve, established in 1968, protects about 707,000 kilometres of lakes, steppes and semi-deserts. The territory of the reserve contains a large wetland with rushy cattails, channels and lakelets.

The water of Korgalzhyn Lake is so desalinated that it is even drinkable.

In 1976, the Tengiz-Korgalzhyn lakes were included in the Ramsar List of Wetlands of International Importance. In 2000, Tengiz Lake became the only lake in Kazakhstan to be introduced into the international network, Living Lakes. In 2007, the protected lakes were included in the international network of Important Bird Areas (IBAs). In 2008, its territory was named part of the UNESCO World Natural Heritage. In 2012, it was recognised by UNESCO as the first biosphere reserve in Kazakhstan. 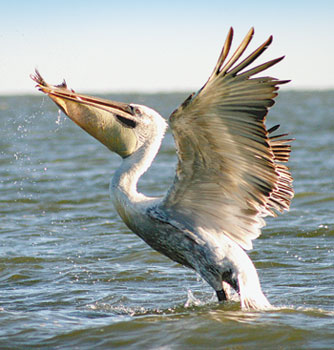 Not only flamingos inhabit lakes near Astana, but also pelicans and cranes.

The air on the reserve is thick with the scent of flowering grasses and sagebrush. The reserve contains more than 500 species of flowering plants. About 40 percent of them are from the family Compositae, cereals and chenopodiaceous plants. Half the species are typical steppe forms. There are no trees, but there are 12 types of bushes adapted to flood plains, including shrubby willows, briars and honeysuckle. The reserve protects 45 species of rare and native plants like Shrenk tulips and double-flowering tulips, blue onions, Ural licorice, sandy everlasting, marshmallow, black wormwood, Lessing feather grass, steppe sage and others. The fauna of Korgalzhyn is typical for the local area and includes 43 species of mammals, 347 species of birds, six species of vermigrades, six species of amphibians, 300 species of beetles and 14 species of fish. The local steppe inhabitants are unique and protected by Kazakhstan’s Red Book. They are the Demoiselle crane, Vanellus gregarious (sociable lapwing), Ciconia nigra (black stork), Cygnus cygnus (whooper swan), Branta ruficollis (red-breasted goose) and others. Foxes, wild boars, grey hares, mountain hares and Hemiechinus (long-eared hedgehog) are permanent inhabitants of the steppe region. From time to time, forest dwellers like lynxes, roe deer and elk come into the reserve area from Northern Kazakhstan and Western Siberia.

But it’s the pink flamingos that give this place its particular charm and make it a paradise for birdwatchers. The spectacle of mass flight and the large gatherings of flamingos and other waterfowl on the lake create indelible images. Kazakhstan’s flamingos form the world’s northernmost breeding colony. They have been nesting here since the Paleogene period, when the whole Tengiz-Korgalzhyn basin was covered by the sea of Tethys. The population of flamingos in a season reaches 50,000-60,000 individuals.

Every year, more and more tourists come here to admire the pink sky, covered with flocks of flamingos, and contemplate unspoiled nature. The reserve is always open for Kazakhstan’s and foreign scientists. In 2009, the visitor’s centre of Korgalzhyn Reserve began work as an environmental education centre. Since then, about 20,000 people from Kazakhsan and abroad have visited the centre. There is also the Baldauren children’s ecocamp, which every summer helps children get aquainted with the reserve. Various tour operators offer tours or guests can come alone in a car or shuttle from the bus stations of Astana. The trip takes three hours from Astana on the Korgalzhin route.