ASTANA – New regulations and legislation issued over the last two years are succeeding in maintaining freedom of religion in Kazakhstan while preventing abuse by extremist groups, top officials say. 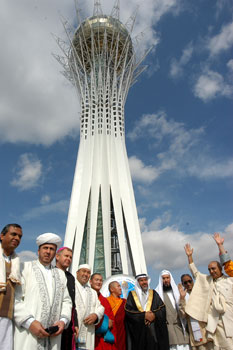 The new law is aimed at protecting freedom of religion and supporting stable spiritual environment in Kazakhstan.

“Freedom of religion is the necessary condition for a democratic society, one of the main elements within the system of human rights and freedoms. The issue of freedom of religion shall always remain relevant for Kazakhstan as a multi-confessional country,” Kairat Lama Sharif, Chair of the Agency for Religious Affairs (ARA), told a conference on “Freedom of Religious Denominations” on March 19.

For 20 years, Kazakhstan has enshrined freedom of religion in its Constitution. Article 22 states: “Everyone shall have the right to freedom of conscience.”

The importance of freedom of religion is acknowledged in Article 18 of the Universal Declaration for Human Rights (UDHR), adopted by the United Nations General Assembly in 1948. It states, “Everyone has the right to freedom of thought, conscience and religion.”

One of the first legislative acts passed after independence was the Law on Freedom of Religion and Religious Associations in 1992. The main achievement in the religious sphere over the past 20 years has been complete absence of inter-faith conflicts, which is critically important for Kazakhstan’s multi-ethnic and multi-religious society. The country has earned an international reputation for its religious tolerance and cooperation and its leading role in promoting inter-faith dialogues on a global scale. The triennial Congress of World and Traditional Religions in Astana became an internationally renowned symbol of the country.

However, guaranteeing freedom of expression unwittingly also gave opportunities for pseudo-religious extremist and terrorist groups to try and operate in the country. It also eroded traditional values and religious identity.

This led to a new Law on Religious Activity and Religious Associations being passed in October 2011. It expressed the need for more active participation by the state in monitoring the activities of religious groups.

The law confirms Kazakhstan “as a democratic, secular state, confirms the right of each person to have freedom of conscience, guarantees equal rights to citizens of the Republic of Kazakhstan regardless of their religious convictions (and) recognizes the historical role of the Hanafi school of Islam and Orthodox Christianity in developing the cultural and spiritual life of the people, Lama Sharif said.

It respects other religions that blend with the spiritual heritage of the people of Kazakhstan, recognizes the importance of inter-faith harmony, religious tolerance and respects the religious convictions of citizens, he added.

The law acknowledges that the state cannot ignore dealing with religious issues.

Given the sensitivity of the issues, experts suggested that the government should offer guidelines to official bodies at regional and state levels on how to enforce the new law and on how they should examine religious literature and define missionary activity. The new law and its implementation will also be subject to independent reviews.

“The law is very important for control of spiritual situation in the country, for effective protection from destructive religious ideas and sects, which quite often interfere with private life of a person. There were cases when such interference led to divorces or even suicides. Actually, consequences of such sects practice can be observed in all countries, where they exist. Disseminators of destructive religious ideas try to persuade young people that Islam in Kazakhstan has weak historical roots and it is needed to look at other Muslim countries. But we have our own history,” the former Supreme Mufti of Kazakhstan Absattar Derbisali said.

“Kazakhstan has own religious scholars, whose latitude does not contradict with Sharia (religious law of Islam) and traditions of our people. It is unacceptable for us when our people start to find out what Islam is in other countries, go there, study it and afterwards bring quite alien understanding to our society,” he underlined adding that new law with accompanying regulations will help Kazakhstan protect freedom of religion.