Of Astana, Its People and Beshparmak

Gareth Stamp is an expatriate citizen of the United Kingdom who has been living in Astana for two years. The Astana Times had the pleasure to talk to Mr. Stamp about our capital, its people and beshparmak.

One of many photos made by Mr Stamp during the team building activities. As he says, the reason he loves the country so much is its people.

For those who don’t know you, could you please tell us about your job at the Nazarbayev Intellectual Schools?

My title is team leader at the Nazarbayev Intellectual School. Basically, I’m in charge of the international teachers. When I say I’m in charge, they all have their roles and jobs to do and I just keep an eye on them and if there’re any issues, I deal with those issues. I also teach students, but most of the time I do teacher training and teacher development with the local staff. It’s almost like a psychologist’s job and I love it. This year, I’ve been working less with the teachers in the classroom but mainly with the administration staff, the HR people. I really enjoy doing that. Last year was curriculum development, so we wrote the new national curriculum and they’ve implemented it this year. It’s exciting; it’s a different job every day. Intense at times but again, you make of it what you want to make of it.

Could you tell us about your impressions of Kazakhstan?

I love this place, I’ve loved it since about two weeks after I arrived. I just fell in love with it. It’s like nowhere else I’ve ever been. It’s the people, actually, that’s why. It’s not the climate, it’s not the landscape and all of those things. Because it’s such a vast area, you tend to stay in one place. I’m ashamed to say I haven’t travelled very much at all, but you have to allow time for that. Certainly travelling around here is easy, but you have to plan it.

It’s a stable place to live, though. As an expat, it’s a very safe place; it doesn’t feel threatening in any way. I mean I feel safer here than in some cities in Britain. I know a lot of young female colleagues that have no qualms about getting into a taxi late at night on their own. You put your arm out, a car stops and you get in it. There’s an element of trust there. We certainly wouldn’t do that in the UK. We stopped “hitchhiking,” as we used to call it, years ago. You wouldn’t recommend anybody to hitchhike at all now. Which is a real shame, because it’s a great way to move around the country and see places. It works very efficiently here. And some of the most interesting moments are in these cabs; they’re great. I mean, people find out that you’re English and they just want to talk to you and name all the football teams in the world. I hate football by the way, but I did have one taxi journey where the only English that the driver knew was literally football teams. Unfortunately, it was a long journey and I think we got down to Leyton Orient, which is a very small team in the UK. But he knew it, he knows his football. People don’t understand that I’m from Britain and I don’t like football. I’m happy to go and watch a live match, which I do here, but that’s different from on television.

Tell us more about your life in Astana. Could compare it with other cities in the country?

Astana is a very easy city to get around: the buses are good, the cabs are good. It’s a bit difficult in the snow and ice but you just adjust to it. Almaty is harder; I keep getting lost there. The taxi drivers don’t seem to know where they’re going. It should be easy because it’s a grid, and it’s either up or down, but no. I couldn’t live in Almaty, but I like it. It’s a great place to visit; there are a lot of things going on. And I like the weather. I was there for Nauryz and it felt like spring, I finally understood what the celebration is about. The trees were in bloom, the birds were singing, the sun was shining, whereas here last year it was just another day in winter. 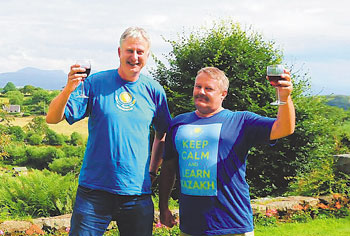 Please tell us a story you have experienced here that wouldn’t have happened anywhere else.

This is the perfect place for a British person to come because Kazakhs love to talk about the weather, and that’s what we do all the time. We have something in common. And tea drinking, a lot of teas drunk here. Something else: a lot of people in Britain like horses, but they don’t eat them. That is an issue here. People say to me, “Oh, I couldn’t eat that.” But you have to understand that they’re actually farmed for eating. A lot of people like cows and just like the horses, they’re there for a reason. This isn’t the family pet or the loser of a race; this is there for eating. And it’s actually very good for you, very healthy. A very small amount of fat in it; it’s very lean. And it’s very tasty. And that’s also another thing that I love about Kazakhstan, apart from the people—I love the food. I don’t think I could eat traditional Kazakh food every day. There’s a limit to how much beshparmak you can consume. I was here when they did the world record in Khan Shatyr for the biggest beshparmak. I was actually a judge. It fed a thousand people. I got the figures for how much horse was in it; it was something like 40 kilos of horse. As a judge I had to watch how they made it and taste it. It was a funny day, the whole thing was very funny. It was part of the 20th anniversary celebrations and I just happened to be at the wrong place at the wrong time and ended up being a judge. The problem was that everyone thought I worked for the Guinness World Record. And all of the questions were something like “How long have you worked for Guinness World Record?” “Well, I don’t.” “How many of these have you done?” “Well, I haven’t.” I don’t speak any Kazakh or Russian, and I spoke even less then, so I grabbed somebody I knew from the crowd to come and translate for me. At the end of the event the organisers thanked me and three other judges and took us to a restaurant and gave us – you guessed it – beshparmak. The whole day was very funny, and I’d only been here for two or three months and thought to myself that this is what this place is like: totally mad.

What do you think about the future development of our country?

The opportunities here to do business are great. Personally though, I think it’s the small- and medium-sized business that are the opportunities, I don’t think big business is the right way to do it for development. Growing an economy, you need people to be involved in business. If you have a big company, you go and work for that company and people just see it as a job, they work and then they go home, whereas if you run your own business you’re more determined to make it work. I mean, a country of entrepreneurs is a vibrant country. People have so many ideas here. It’s one of the reasons why in the economic crisis places like Germany are seen as some of the best places because they’re actually relying on small and medium businesses. Other countries aren’t. Great Britain is dependent on big business, it doesn’t grow. If you think of the amount of money Germany spent bailing out East Germany, Greece, they’re still vibrant, and they seem to be doing much better than other countries. I think there’s a model there that Kazakhstan could follow. If we keep talking about business, a lot less red tape would be nice. A bit more trust, so that you’re not inspecting things all the time, blaming people, and just letting it flow. Just relax. You’re allowed to make mistakes. It’s not a problem; you shouldn’t be jumped on for making mistakes.

People don’t believe me when I say this, but I do wake up and still now, it’s been two years that I’ve lived here, wake up with my eyes closed and open my eyes and think “Yep, it’s still here, it’s still real.” Because it is like a dream. It’s a dream place. You can’t explain how good this place is. My lifestyle here is completely different. I’ve got so many friends here, it’s unreal. There’s no way I would’ve been in this situation in the UK. I don’t feel pressured, I feel relaxed. I’m doing more work than I would’ve done in the UK, I work longer hours but I don’t care.