By Svetlana Abenova in Tourism on 18 April 2013

EAST-KAZAKHSTAN REGION – A new book chronicles the history of Oskemen, also known as Ust-Kamenogrosk, for more than 260 years to the beginning of the 20th century. 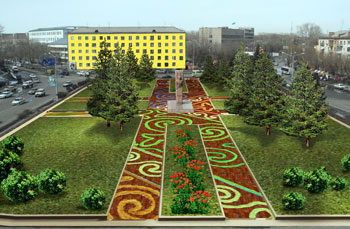 An artistic rendition of how one of the squares in Ust-Kamenogorsk will look like after its renovation.

The book, released by the Heritage private publishing house, is called “Annals of Ust-Kamenogorsk: 1654-1918.” It documents many previously unknown or forgotten events in the city’s history. It is the product of several years of research by its three authors.

The book starts long before the founding of the fortress of Ust-Kamennaya in 1720 and ends with the Communist Revolution of 1917.

“For a long time I have been collecting scattered material in various archival sources. The first references to the region date back to the middle of the 18th century,” Galina Kush of the Regional Museum of History, the book’s editor, told The Astana Times.

The book quotes materials in the museum and documents and photographs from private collections that have never been published before.

“Since childhood my visits to museums have been my most vivid memories. I always wanted to unravel the mysteries of antiquity and to revive the history of artifacts and documents,” Alexander Kharlamov, chief editor of Heritage Publishing, told The Astana Times. He is one of the three authors of the “Annals” and the owner of the Retro antique shop.

Kharlamov said the book tells the stories of the remarkable personalities and important events in the city’s history.

The records of the times of Tsar Peter the Great 300 years ago were studied and cited. Maps and photographs from that time were restored with the help of modern technology. The third author, local historian and designer Dmitry Cherepanov said that weeks were spent on processes to restore some of the photographs used in the book.

“The publication of our own chronicles is a big victory and a breakthrough for Ust-Kamenogorsk city,” said researcher and writer Boris Shcherbakov, who recently published his own folio “Eastern Kazakhstan – the Heart of Eurasia.”

The book contains the five municipal coats of arms in the city’s history and reveals new details about the founder of the fortress of Ust-Kamennaya, Russian Army Major Ivan Vasilievich Likharyev, who was leading an expedition looking for Yarkenda gold.

Heritage Publishing plans to publish two more volumes on the city’s history bringing the story through the Soviet period, and its current era in independent Kazakhstan.