By Marzhan Imanbayeva in Nation on 10 April 2013

ASTANA – On April 15, Kazakhstan will celebrate the National Day of Lovers as a tribute to the history and traditions of the Kazakh people. 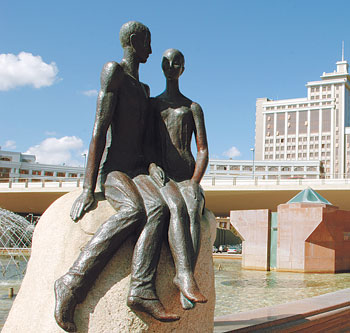 The Monument of Lovers is a popular place for photo sessions of the newlyweds.

The holiday is named after the legendary couple Kozy-Korpesh and Bayan-Sulu.

The ancient lyric poem about them is the most popular work of its kind in Kazakh literature and dates back to the 13th or 14th century. For more than half a millennium, it was passed on by word of mouth. The first record of one of its variants was made by the Russian poet Alexander Pushkin 190 years ago and is preserved in his archives.

“I love and admire the Ayagoz River because it was the location of this love story,” he wrote in his “Diary of a Trip to Ghulja.”

Anthropologist Grigory Potanin too said that this love poem was his “favourite story, famous in the entire steppe from Orenburg to Zaisan. It is major source of Kazakh ethics.”

The poem tells the story of two friends Karabay and Sarybay who gave each other an oath that their children would get married. Sarybay died when his son Kozy-Korpesh was an infant. Then Karabay changed his mind and decided to give his daughter Bayan to another batyr, or warrior, called Kodar, who saved his herds in the arid desert. Karabay had left the tribe of Sarybay and Bayan had grown into a beautiful young woman whose home village was renamed after her as Bayanauyl.

The fame of her beauty spread throughout the whole steppe. Bayan became known as Bayan-Sulu, or “Bayan the Beautiful.” She didn’t love Kodar and waited for Kozy-Korpesh. Fearing their meeting, Karabay and Kodar took Bayan-Sulu away but she left clues on the road. On a mountain, she left her comb. That mountain is still called Altyn Tarak (a gold comb in Kazakh). She dropped her belt in a valley, and this valley is called Kyzyl belbeu (a red belt in Kazakh). She scattered a necklace, and the mountains were called Monshakty (the beads in Kazakh). By these traces, Kozy-Korpesh followed her clues and found her. They fell in love at first sight. But then Kodar, having failed to defeat Kozy-Koresh in a fair fight treacherously murdered him in his sleep.

Bayan-Sulu took her revenge. She asked Kodar to bring water from a deep well. Kodar agreed to climb down into the well using her hair braids as a rope. But then Bayan-Sulu cut her hair braids and left Kodar to die in the well. She couldn’t live without Kozy-Korpesh and stabbed a knife into her own heart.

Kozy-Korpesh and Bayan-Sulu were buried together. The poem about them has passed from generation to generation and visitors still come to their tomb near the village of Tansikin in the Ayagoz district of East Kazakhstan. Young couples go there to request protection, and lonely singles ask to meet their future mates.

This famous tomb is one of the oldest in Kazakhstan. It is built of stone and has a pointed dome tapering upward to 12 metres (39.37 feet).

Various versions of this epic exist in the folklore of some Turkic-speaking peoples. The Bashkiri version of the poem is called “Kuzy Kurpesh Menen Mayan Hylu,” the Tatars call it “Kozy Korpesh” and the Altais call it “Kozy Erkesh.”

The Institute for Cultural Development and the Tagylym literary society are planning to translate the poem into English.