KEGOC to launch IPO by End of June

ASTANA – KEGOC, the Kazakhstan Electricity Grid Operating Company, will issue its Initial Public Offering (IPO) of shares by the end of June, a press conference was told on March 18.

Later this year, KazTransGas (KTG) and Samruk Energo will also issue their IPO shares offerings, the press conference was told.

Deputy Prime-Minister Kairat Kelimbetov told the press conference that the first round of the People’s IPO Programme had been a success. The value of the new shares had increased and boosted the value of KazTransOil (KTO) in 2012. The company reported a net profit of 33.5 billion tenge ($220 million) in 2012, a 29.1 percent increase on 2011.

“KazTransOil will distribute dividends for 2012 and direct more than 40 percent of its net profit into its shareholders’ dividends. The shareholders will receive returns on their investments and invaluable experience of co-ownership of the largest national assets,” Kelimbetov said.

The amount of the dividends will be announced in May after the Annual General Meeting of KTO shareholders.

Bank CenterCredit (BCC) investment analysts say the results of KTO exceeded expectations. They predict the minimum commission rate will be 38 tenge (25 U.S. cents) per share, 5.2 percent of the offering price or 4.6 percent of the current market price.

“We have revised our valuation model, reducing growth forecast costs, and as a result we have increased our estimates of the fair shares value to 854 tenge $5.66) and raised our 12-month target price to 912 tenge ($6.04) per share and recommend buying shares of KTO,” a Halyk Finance analyst said.

The Asyl-Invest Company recommends purchasing KTO shares as a protective hedge against the expected strong correction in global financial markets. Experts believe there are three factors that can boost the value of KTO shares: the possible transit of 7 million tons of Russian oil per year through KTO’s pipelines in Kazakhstan to China, possible additional payments from the Russian company Transneft to KTO worth $65 million for oil, and the new tariff for oil transportation at the Kasymov oil station which was approved on February 11.

KazTransOil’s own management projects significant revenue growth in 2013 that will make the company’s securities more attractive to investors.

“I can definitely say profits will be higher in 2013, because the tariff for oil transportation was raised on Dec. 1, 2012 for both the domestic and foreign markets. The company’s profit will rise significantly, 30 percent in 2013 above that of 2012,” KazTransOil Director General Kairgeldy Kabyldin told the press conference.

New oil tariffs will increase the profitability of the company over the next three years.

KEGOC’s main goal is to maintain the steady operation of the country’s unified energy system and to exercise reliable control of the National Power Grid maintaining engineering, economic and ecological requirements set up by the government. It aims to establish world class operating standards and to become Central Asia’s most advanced utilities provider by 2025.

Experts believe KEGOC’s ratings continue to be aligned with the sovereign ratings given the state guarantees for 56 percent of its debt. KEGOC is under full state control and enjoys strong government support.

KEGOC, as a subsidiary of Samruk-Kazyna, serves as the system operator of Kazakhstan’s single power grid. It operates 24,500 kilometres (15,223 miles) of power lines with a capacity of 110-1150 kV and 74 power stations with an installed capacity of transformers of 33.6 GVA.

An Initial Public Offering or IPO is the first public offering by a company of its shares for sale. The People’s IPO programme allows Kazakhstan citizens to buy shares in the largest national companies to share in their profits. The companies issuing the People’s IPO shares were selected from the most stable corporations in the country operated by the Samruk-Kazyna National Welfare Fund. Ownership of shares in successful companies will give citizens the opportunity to profit from their development and growth through rises in share values and through the payment of dividends.

Experts believe the programme will help the development of Kazakhstan as a regional financial centre in Central Asia. 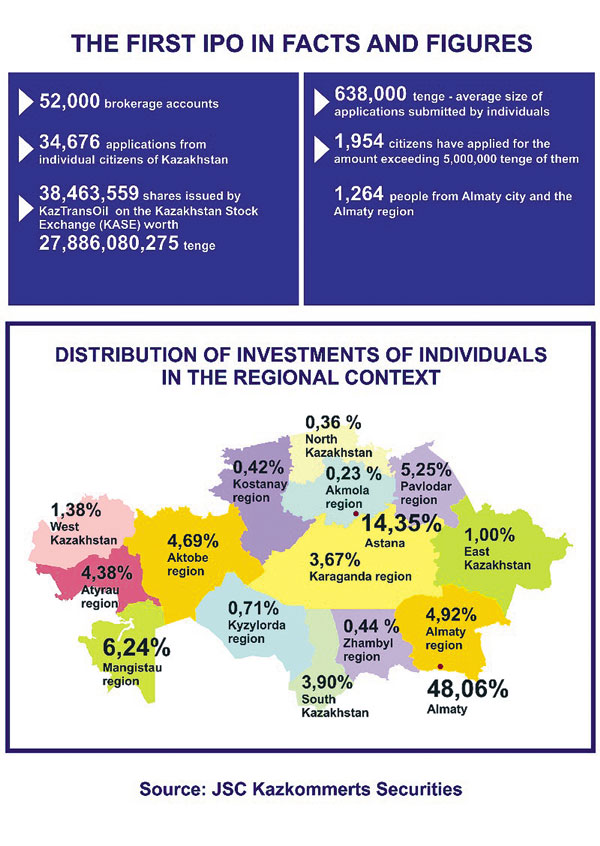