ALMATY – Would-be Medieval warriors from Almaty, Pavlodar, Petropavlovsk and Stepnogorsk are preparing to defend the honour of Kazakhstan at the fourth international medieval Battle of the Nations competition to be held in France in May. 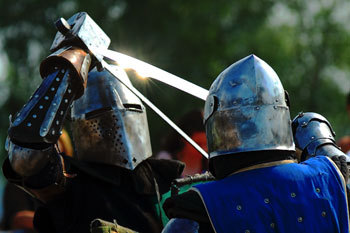 Back to Medieval times... Kazakh warriors will show their combat skills at the international tournament in France.

The sport and its competitions are relatively new and involve full-contact battles with the use of armature and offensive armaments typical of the Middle Ages. The fighters recreate their armour and armaments according to historical patterns. The Battle of the Nations event has recently become the main competition between fighters practicing historical medieval battle and includes participants from Russia, Ukraine, Poland and Belarus.

According to Kazakhstan coach Yaroslav Alexandrov, who is also going to go to France with the national team, the Kazakhstan club was established three years ago and has since sought opportunities to compete.

The majority of Kazakhstan medieval warriors are from Pavlodar and Almaty cities and are members of the club Order, organized six years ago. The boys train together three times a week and meet in the mountains on weekends in full battle gear. They pay a lot of attention to physical training and testing their equipment. They also study medieval battle techniques in addition to modern forms of combat sport. Battle competitions are fights, so there is monitoring to ensure the use of legal techniques and hits. As Kazakhstan’s sportsmen cannot train together, everyone prepares for competitions in their native regions and communicate and share training information through the Internet.