KYZYLORDA REGION – The first meeting of the Kazakh-Russian Intergovernmental Commission for the Baikonur complex held on March 28 and chaired by Deputy Prime Minister of Kazakhstan Kairat Kelimbetov and First Deputy Prime Minister of Russia Igor Shuvalov once again demonstrated the commitment of the two countries to cooperate at the space complex. At 2:43 a.m. on Friday, the meeting’s participants witnessed another successful launch of the manned spacecraft Soyuz TMA-08M. 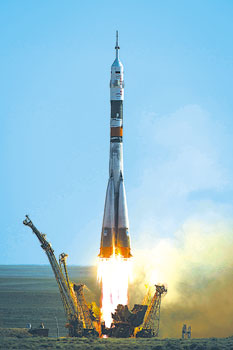 Astana and Moscow to continue cooperation in space.

“The main principle of cooperation in Baikonur is a mutually beneficial partnership and unconditional commitment to the agreements signed by the presidents of Russia and Kazakhstan in 2004 on the extension of terms for leasing Baikonur up to 2050,” Deputy Prime Minister Kelimbetov said at the briefing.

First Deputy Prime Minister Shuvalov in turn paid special attention to the high potential of the complex, the implementation of joint programmes in the aerospace industry and other areas that could benefit Baikonur residents. In addition, he pledged that the two countries have no differences regarding the coordination of space launches from Baikonur, stressing that the schedule for 2013 has already been approved. Moreover, an agreement on developing a launch schedule for the medium term was reached. Then Kelimbetov and Shuvalov signed the minutes of the meeting.

Development of a roadmap for joint use of the Baikonur complex and a draft of a new intergovernmental agreement on further cooperation in its use were among the key topics of the meeting. The basic provisions of the roadmap must be prepared for the meeting of the two presidents, scheduled for late May 2013. The parties worked on an improved version of the new legislation concerning the joint use of the complex leased by the Russian side as well as the town of Baikonur.

The status of the town of Baikonur came under scrutiny too, relating to increasing Kazakhstan’s government’s involvement in the socio-economic development of the town, where new education and health care infrastructure facilities are planned to be constructed. For the first time, individual houses and apartments will be built there and local residents will be able to own them privately.

Kazakhstan’s space agency’s part in Russia’s long-term projects, not only at the Baikonur Cosmodrome but also in Russia, was also considered.

During the working visit, the heads of the delegations, chairman of Kazkosmos Talgat Mussabayev and head of Russia’s Space Agency Vladimir Popovkin, as well as representatives of ministries and departments of the two countries visited sites in the town and the spaceport.