ASTANA – Kazakhstan has improved its position as a global tourist destination in a new report issued March 7 by the World Economic Forum. 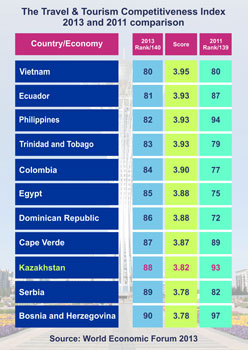 Over the past two years, Kazakhstan has climbed five positions from 93rd in 2011 to 88th this year among the 140 countries in the report. It monitors such criteria as national legal systems, environment, safety, health and hygiene, the priority of tourism, internal air and land transport, tourism infrastructure, pricing, human resources and national culture.

Estonia led the former Soviet republics in the index at 30th and the other Baltic states of Latvia and Lithuania ranked 48th and 49th. Russia was at 63rd, between Saudi Arabia and South Africa, Georgia was at 66th and Ukraine at 76th.

Kazakhstan has been developing its tourism industry. The number of visitors grew from 11 million in 2004 to nearly 17 million last year. Tourism is now an important sector for foreign investment, a roundtable conference on the subject was told in Almaty on March 15.

The International Academy of Business (IAB), the Kazakhstan Tourist Association (KTA) and the Kazakhstan Association of Hotels and Restaurants organised the March 15 conference on “The Creation of Kazakhstan’s Tourism Brand in Anticipation of New Property and Financial Sector Initiatives.” Government officials, business leaders, NGOs and scientists discussed tourism development.

Dagmar Schreiber of the Kazakhstan Tourist Association (KTA) said that Kazakhstan was poorly differentiated in global advertising and was not perceived as an attractive destination. She said the Silk Road and mountains and great natural resources were major assets, but the domestic tourist industry was not sufficiently developed while hotels and flights to the country were still too expensive.

Journalist Arkady Pozdeev told the conference Kazakhstan still had great tourism potential but its resources needed to be developed.

Experts agreed Kazakhstan needs to build new facilities and develop its tourist industry. It needs to deregulate private businesses in tourism and offer them cheap loans. New road and rail links need to be built to major tourist attractions.

Since 2010, the tourism industry has been expanded within the 2014 Tourism Industry Development Programme.

Issekeshev told tourism industry executives that the sector would be developed on a four season, all year active basis. Over the next seven years, 550,000 new jobs would be created in the tourism industry to serve an additional 8.2 million tourists per year.

“We plan to make Astana the main tourist centre, as well as Almaty. We plan to develop beach tourism in the Mangistau region. We also plan to organise tours to historical monuments in the East Kazakhstan and South Kazakhstan regions. The programme will cost $10 billion,” Issekeshev said. About 70 percent of the investment will come from foreign investors, he said. The government would develop five main tourism centres and more than 20 regional projects.

“The state must play a pivotal role in developing the national tourism industry. The experience of Malaysia, Singapore, Spain, Mexico, Morocco and other countries shows this is crucial,” Prime Minister Serik Akhmetov told the meeting.

Akhmetov said new infrastructure had to be built to expand the tourist industry.

“Kazakhstan has a vast territory with potentially attractive tourist areas. Increasing the flow of foreign tourists will generate new jobs and new profitable businesses,” he said.