ASTANA – Off Road Kazakhstan, a rally team consisting of Denis Berezovsky and Alexey Nikizhev, won the Аbu Dhabi Desert Сhallenge 2013 in the T2 class. The race took place from April 4 – 11 in the United Arab Emirates (UAE) and represented the second stage of the FIA World Cup (International Car Racing Federation) and the first stage of the FIM World Championship (International Motor Racing Federation). 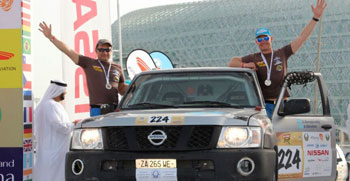 The Kazakhstan racers, driving a Nissan Patrol SUV, completed the final stage of the 266-kilometre race in four hours, nine minutes and 22 seconds. Another Kazakh team, consisting of Bauyrzhan Issabayev and Stanislav Podolyanyuk, came in second.

“We are very satisfied with the race. This is a great result for us. We already were on the podium five years ago, and now we’ve repeated that; it has multiplied our success. The race was tough. Before the podium, technical commissioners ‘gutted’ the car again. The first places are not gifts. The winners of the three classes passed a detailed check… They had no questions for us [then], as well as during the entire race. So we received the official medals; we were the first in the class,” said driver Denis Berezovsky.

Navigating mate Alexey Nikizhev has just experienced his first success at such a level. “For me, this is the first such podium, the most valuable achievement. I believe this is a leap forward for our whole Kazakhstan team.”

In the overall classification for cars, Berezovsky and Nikizhev took 11th place. Winners of the Abu Dhabi Desert Challenge 2013 in the cars classification were Nani Roma of Spain and Michel Perin of France.

Another Kazakhstan representative, Alexander Linnik, was ranked 36th in the moto classification. Linnik, the first in the history of Kazakhstan to take part in such a big race on a quad bike, was 11th in his class.

“Everything was great, even though it was hard. This awesome race taught me a lot. I was here for the first time; I hope to correct all errors and physically train more for the next race. And I think we will succeed,” Linnik said.

Kazakhstan racers Kanat Shagirov and Alexander Moroz, who were 17th in the overall car classification, shared their impressions.

“Abu Dhabi Desert Сhallenge 2013 was over, the official finish was passed. The most important thing for us is that we made it, we reached it. There were some problems, of course, we expected better results from ourselves. The race was hard, but interesting,” driver Shagirov said after finishing.