ASTANA – On April 3, Chevron Oil celebrated the 20th anniversary of its operations in Kazakhstan at the Palace of Independence in the capital. 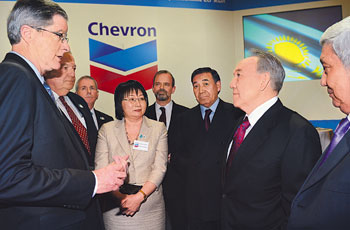 President Nazarbayev (r) discusses future cooperation with John Watson (l), chairman of Chevron, as other Kazakh and U.S. officials and Chevron executives look on at the April 3 event in Astana.

“I would like to take this opportunity and congratulate those present on 20 years of joint work with Chevron. Thank you for your long-standing friendship,” President Nursultan Nazarbayev said at the reception.

It was 20 years ago that President Nursultan Nazarbayev and the then chairman of the board of Chevron Kenneth Derr signed an agreement for Chevron to develop the Tengiz field in the Atyrau region, considered the world’s sixth largest oil field by reserves.

“Thanks to $20 billion invested by Chevron over the period of 20 years, Kazakhstan has grossed $77 billion. About $800 million has been poured into the social development of Atyrau region. Thousands of Kazakhstan specialists have been trained. Today, Atyrau is one of the most beautiful cities in the republic and it is called ‘the oil capital of Kazakhstan’. Over the last two decades, the [Tengizchevroil] company has increased the crude oil output 26 times,” the president said.

“Local content is very important. Today, the company makes about a third of all its purchases in our country. We want this indicator to grow. I am grateful that you responded to my request and built a factory to make plastic pipes in the Atyrau region. I also want to say that the start of construction of the Palace of Youth in Atyrau is a joyous occasion for all local citizens,” the president said.

He said the country’s partnership with Chevron would continue and overcome new challenges. He said further development of the Tengiz project to increase production would require another $ 7.5 billion in investments.

“There are some new tasks ahead. The company will increase oil production and additionally invest about $7.5 billion,” the president said.

“Oil production at the Kashagan deposit will start in June. After that, Kazakhstan is forecast to be in the world’s top five oil-exporting countries. We have set the task of entering the 30 most developed countries in the world by 2050 and therefore, we are creating a program of industrial-innovative development for the country. I am sure that Chevron will take part in it very actively. It is necessary to work together with the government. You should build enterprises in mining and refining, manufacturing the equipment for oil production and refining. You should create new jobs and businesses,” he said.

[The Kashagan oil field is developed by an international consortium of European, American, Kazakh and Japanese firms and does not include Chevron.]

U.S. Secretary of State John Kerry congratulated President Nazarbayev and Chevron’s former chairman and CEO Kenneth Derr for their strategic vision which launched the mutually beneficial relationship between Kazakhstan and Chevron 20 years ago through the creation of Tengizchevroil (TCO). That agreement to develop the supergiant Tengiz and the Korolev oil fields made Chevron the first major international oil company to invest in the newly independent Kazakhstan.

“In many ways, that agreement laid the cornerstone for the successful economic relations that have developed between the United States and Kazakhstan,” Secretary Kerry wrote in his letter to President Nazarbayev read out at the occasion by U.S. Ambassador to Kazakhstan Kenneth Fairfax.

“The world was a different place 20 years ago, and reaching this agreement required vision and courage. Kazakhstan was a young and as yet untested country searching for a path forward in a modern, globalizing world. Having lived for decades under a centrally planned economy, it took courage for the relatively new Government of Kazakhstan to make the decision to place its trust in an American company and to embrace market-oriented economic policies that emphasize cooperation, rule of law, and sanctity of contracts. Similarly, it took vision on the part of Chevron to make a massive, strategic investment decision in a land-locked country that had only recently declared independence,” Secretary Kerry noted.

“I would like to congratulate the people of Kazakhstan for the achievements over the past 20 years and to assure you of the continued friendship and support of the United States of America as you move forward with the additional reforms needed to join the World Trade Organization and to achieve your nation’s goal of becoming one of the world’s most competitive economies,” Secretary Kerry wrote.

Chevron executives confirmed their readiness for further cooperation and announced plans to build a new Palace of Youth in Atyrau.

“Today I am proud to announce an exciting new investment to benefit the children of Kazakhstan. In Atyrau, Chevron is beginning work to build a Palace for Youth. When it is complete it will provide new opportunities (for the children of the region),” Chevron CEO John Watson said.

The management of TCO has presented a master plan for future expansion, to extract an additional 12 million tons of oil and increase oil production in existing wells in the Tengiz field.

“This project provides an opportunity for TCO to expand production for an additional 12 million tons of oil and increase oil production from existing wells. New jobs will be created throughout Kazakhstan and especially in the Mangistau and Atyrau regions. A large amount of production will take place in the Mangistau region, so we are here to sign the agreement with the governor of the region,” TCO General Director Tim Miller said.

The parties signed a Memorandum of Understanding. The project is now under consideration by the government and, after approval, TCO will start implementing it.