ASTANA – Andrey Gundarev is known as the first citizen of Kazakhstan to ascend the highest volcano in the world called Ojos del Salado (6,893m) as part of the Kazakh-Russian expedition. Thus, he is well on his way to achieving his goal of scaling the “seven highest volcanoes on the seven continents.” 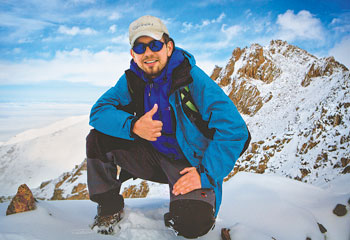 Andrey Gundarev wants to mount all peaks of the world.

Recently, he became the first Kazakh climber to make a successful ascension on the highest volcano of North America called Orizaba. Orizaba, with the height of 5,700 meters above sea level, is located in Mexico near a small town of Puebla-de-Zaragoza.

“We went up, even more, climbed on the highest volcano of the continent of North America, Orizaba. For acclimatization purposes, we earlier went up the third highest volcano in Mexico, with a name difficult to pronounce, Istasihuatl (5,200m). Now the whole team relaxes on the island of Cozumel in the Caribbean Sea,” the climber said about his mission.

Pursuing the so-called “seven highest volcanoes on the seven continents” programme, Andrey Gundarev has already been on the summits of four volcanoes including Elbrus (5,642m) in Europe, Kilimanjaro (5,895m) in Africa, Ojos del Salado (6,893m) in South America and Orizaba (5,700m) in North America.

Gundarev’s main job is a mountain guide. Usually he conquers mountains and volcanoes with his clients. He spoke to the Astana Times about what drives him to do the things he does.

You are known as the conqueror of volcanoes, but all know that you “collect” not only volcanoes, but the highest mountains. Do you have other nicknames among your fans?

In the newspaper “Wind of Wanderings” I was called “the chief vulcanizer”. (Smiles).

You’ve been mounting with the clients in many countries around the world, which of those ascents was the most impressive?

I travel with my clients in most of my expeditions. But sometimes I take my family with me. The most impressive mounting was when we were climbing Mount McKinley in Alaska. The weather conditions were very bad. But because of our good preparation and trainings we could successfully scale the mountain in 2010.

Who are your clients mostly?

I work with different clients, not only from Kazakhstan. I have regular clients from Russia and the USA. And recently I climbed Mount Ararat with Turkish clients. 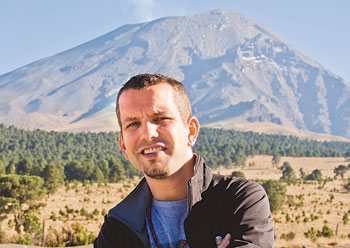 How do they get in touch with you?

The best advertisement is when someone recommends your services to others. But clients find me via my internet site.

You graduated from the Almaty Institute for Energy and Communications and in 1994-99 worked as an engineer of electronic technology. After that, have you ever used the diploma or the profession? Which of the professions is your favourite one?

I don’t even know what I would do without tourism and climbing. It’s a hard question. I like my current job. By the way, I also completed a tourism course at the Turan University in Almaty with an honours degree.

Once you mount all the peaks of the world, what will you do?

There are many interesting alternatives in tourism except mounting. I will continue travelling.

What do you plan for the nearest future?

Soon, I am going to conquer volcanoes Kazbek in Georgia and Demavend in Iran. Also, with an expedition group from Kazakhstan, I will travel to Tibet for a month in August.

What would you advise to young climbers?

I would advise to work hard and to aspire to high results, and to remember that your work should not only benefit you but also people around you. If you have a motivation, the success won’t leave you.