Karaganda Fights Back against Hazardous Waste

KARAGANDA REGION – The Karaganda region has declared war on the 2.7 billion tons of hazardous waste, or hazmat (hazardous material) on its territory. 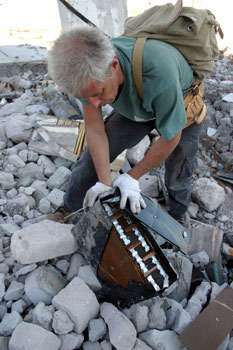 The Government imposed a series of penalties in order to prevent ecological catastrophe in Karaganda.

The Karaganda region covers one sixth of the territory of Kazakhstan, and it has accumulated more than eight billion tons of waste, one third of which is hazardous.

Much of the waste is not hazardous and can be recycled or used for projects like road construction. However, pollutants dangerous to human health and the environment generated by steel, manufacturing, mining and energy activities are growing rapidly.

“Every year up to 160 million tons of waste are added and only one third is disposed of,” Karaganda region Ecology Department Director Zulfuhar Zholdassov told a conference on integrated waste management and the introduction of low-waste technologies.

“New technologies allow us to use many waste materials in production processes,” Zholdassov said. “The Kazakhmys Mining Corporation recycles 67 percent of the waste generated by its industrial processes ArcelorMittal Temirtau recycles 9 percent to 40 percent.”

In the city of Temirtau, the Vodokanalstroy Company uses blast furnace slag as additives in the production of construction materials, including cement.

Industrial waste accumulates in warehouses, ponds and construction sites. Karaganda regional officials estimate that 35 percent of their industrial waste on average can be recycled but they only have facilities in place to process 1 percent. In developed countries, the figure is usually above 30 percent. In Europe, 60 percent of the waste generated by power stations is recycled but these processes have not yet been introduced in Kazakhstan.

The most difficult problems are caused by persistent organic pollutants (POPs).

Ecologist Dmitry Kalmykov, a United Nations Development Programme (UNDP) expert on waste disposal and director of the Karaganda Regional Ecology Museum told The Astana Times that the region still does not have any agency or system to effectively recycle hazardous wastes.

For 15 years, Kalmykov and his colleagues have studied the problem. In 2012, they established the Promotkhody Kazakhstan (Industrial Wastes Kazakhstan) Company. It currently employs 20 people.

“We want to recycle and neutralize hazardous wastes,” Kalmykov said. “I mean acids remnants, alkalis, expired reagents, petroleum products and mercury lamps. These materials are much smaller in volume than the waste generated by mining enterprises, but environmentally they are highly dangerous.”

The problem of collecting and recycling mercury lamps has always been difficult. The city of Karaganda never had an office or agency to collect or store them, even though mercury is a dangerous liquid metal that can cause serious health problems. The regional medical epidemic centre stores two tons of mercury gathered from broken appliances, enterprises and abandoned areas. But it has no facilities to neutralize or recycle it.

Many industrial enterprises face similar problems: They would be happy to recycle the remains of chemical reagents, but there is no company or state agency providing such services. Until recently, all waste material was abandoned or just dumped out on the open steppe. Steppe regions around Karaganda city are full of such sites. Five years ago, a box containing vials of deadly anthrax was found near a residential district.

To prevent such incidents, environmentalists have focused on processing hazardous wastes such as expired reagents, acids, electrolytes, alkalis, chemicals, resins and paints. For each problem, industrial chemists develop a specific technology which is then approved by state agencies.

Promotkhody Kazakhstan has already received major orders to process many hazardous wastes. No one knows the full extent of the problem. Until recently, companies routinely concealed the waste by-products generated by their activities. Now they are required to report on the waste by state law.

The government now imposes serious penalties and steep fines for environmental violations. They also inform industrial producers about Promotkhody Kazakhstan and similar services so now it is more profitable to be responsible towards nature.