By Nadezhda Khamitova in International on 10 April 2013

ALMATY – Saturday, April 6, saw the end of the second round of talks on Iran’s nuclear programme held here, in Kazakhstan’s largest city. 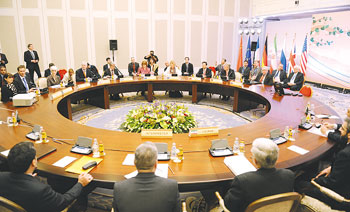 For the second time in slightly more than a month, representatives of the EU3+3 and Iran gathered in Almaty to continue negotiations on Iran’s nuclear programme.

Though the first round of talks was considered more positive than negative, the second attempt to reach an agreement was not as productive. The two-day negotiations did not result in any signed agreement. The parties are set to meet again at a place and time yet to be determined.

In a statement at the end of the negotiations, EU High Representative for Foreign Affairs and Security Policy Catherine Ashton said, “Over two days of talks, we had long and intensive discussions on the issues addressed in our confidence-building proposal put forward during the last round of talks with Iran in Almaty on 26-27 February. It became clear that the positions of the EU3+3 and Iran remain far apart on substance. We have therefore agreed that all sides will go back to capitals to evaluate where we stand in the process. I will be in touch with Dr. Jalili soon in order to see how to go forward.”

“Of course there is some distance between the positions of the two sides. The Islamic Republic of Iran has announced on numerous occasions – stressing the rights of Iranian people, including the right to enrich and an end to behaviours which are a sign of enmity towards the people of Iran – based on these two points, the proposal was tabled to help us to proceed in a constructive fashion… it was decided that they [the heads of the delegations] will transmit the outcome of the talks to their respective capitals. It was also decided that Lady Ashton, after consulting the foreign ministers of six countries, will call me to discuss how the process of talks will proceed,” Iran’s Secretary of the Supreme National Security Council (SNSC) Saeed Jalili said in his concluding statement.

During the earlier round of high-level talks held in Almaty at the end of February, it was agreed by the negotiators that Iran would respond to a revised proposal introduced by world powers in February which calls on Tehran to suspend its enrichment of uranium and disable the underground Fordow facility in exchange for limited sanction relief.

At that point, the Iranian side demonstrated little readiness to accept those proposals unless its right to develop peaceful nuclear programmes was recognised. As in February, this Iranian delegation was headed by Jalili while the European Union foreign policy chief, Catherine Ashton, represented the P5+1, also called EU3+3 group: China, France, Russia, the United Kingdom, the United States and Germany.

On Thursday, April 4, Jalili said the upcoming negotiations in Almaty must recognise Iran’s “right to uranium enrichment.” According to him, “recognising Iran’s nuclear rights, especially the rights of enriching uranium,” would facilitate a solution to the country’s nuclear issue.

“I remain always cautiously optimistic. But I am also very clear that it is very important that we do get a response [from Iran],” Ashton told international reporters in Ankara, Turkey, prior to the negotiations.

At the conclusion of the talks, delegation leaders expressed their gratitude to the talks’ hosts.

“We would like to thank the Kazakh government once again for its excellent hospitality,” Ashton said. Jalili began his speech at the final press conference by saying, “I start by thanking the brotherly government and people of Kazakhstan for hosting the second round…”

“I offered Almaty as a venue for negotiations in the hope that the experience of our young country would be useful,” President Nursultan Nazarbayev wrote in an essay published in The Washington Times. “We support the peaceful use of nuclear power. No other country can match our achievement of voluntary denuclearisation.”

“Negotiation is a time-consuming process. For a long time, parties could not decide where to hold these talks. The fact that they reached a consensus to hold them in Almaty is a sign of a progress in negotiations,” Zhanbolat Ussenov, spokesman for Kazakhstan’s Ministry of Foreign Affairs, said. He also noted that Kazakhstan’s role is that “through hosting the talks, we contribute to the strengthening of regional stability and security.”

“Kazakhstan does not exist separately from either the region or from the world. We are part of world society. In 20 years, our country has achieved justified authority as a consistent advocate of disarmament and security processes. Hosting the talks on Iran’s nuclear programme in Almaty is a subsequent contribution to the processes which we consistently maintain,” he emphasised.

Following the talks, Kazakhstan’s Foreign Ministry issued a statement in which it said that “despite the differences in evaluations [of the talks’ outcome], participants in negotiations are optimistic about continuation of the negotiation process. The solution of Iran’s nuclear programme has a significant role for global stability and security. Rapprochement of parties in the talks of this difficulty and importance for the world community requires a long time. The positive outcome of the Almaty meeting is the agreement to continue the process of negotiations.”

“The Republic of Kazakhstan is not participant of the negotiations and does not take direct part in it. At that, Kazakhstan welcomes the intention of the parties to continue negotiations on Iran’s nuclear programme and expresses hope that parties would reach a mutually accepted agreement,” the foreign ministry continued.

“Kazakhstan remains a consistent supporter of nuclear non-proliferation, and our country is ready to continue to provide maximum assistance to the settlement of the situation around Iran’s nuclear programme through diplomatic means for the benefit of stability and security in the region and the world,” it said adding that “Kazakhstan also gratefully accepts gratitude and appreciation of the level of organization of the meeting expressed by all delegations that took part in this round of negotiations.”

Iran and the P5+1 have already held several rounds of talks, the last of which took place in Almaty on February 26-27.

The most recent round of P5+1 talks on Iran’s nuclear programme at the expert level was held in Istanbul on March 17-18. The P5+1 presented to the Iranian side a more detailed version of the proposals they presented at the Almaty talks in February.

Kazakhstan has played an active role in non-proliferation and was one of the first countries to unilaterally and totally renounce nuclear weapons when it gave up the fourth-largest nuclear arsenal in the world in the early 1990’s. President Nazarbayev took another historic step towards nuclear disarmament when he issued a decree to close the Semipalatinsk nuclear test site on Aug. 29, 1991 in Almaty.