ASTANA – In 2007, the Head of state assigned Bulat Utemuratov the task to develop Kazakhstan’s tennis. As head of the national Tennis Federation, Utemuratov has done much for that, but the main thing is that this sport in the country is actively developing and tennis players from Kazakhstan have significantly improved their level and won the right to participate in prestigious international competitions, such as Davis Cup. 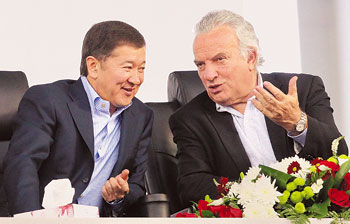 Did you think back then in 2007 that it would take only six years to reach the results that Kazakhstan’s tennis has achieved now?

When in 2007 I became chairman of the Tennis Federation of Kazakhstan it can be said that it did not exist in fact and de-jure. Moreover, all relations with the International Tennis Federation were broken off, which had a negative impact on the image of our sport organization. We had to start from scratch.

The Federation’s structure was established in the regions – directorates and affiliates, which today effectively work, managing through strong vertical ties in all major cities; tennis courts were built and tennis clubs were opened. We have supported young promising athletes understanding that this is our future.

Five years ago for the first time as chairman of Kazakhstan’s Tennis Federation I met Francesco Ricci Bitti, President of the International Tennis Federation. We talked about the promotion of tennis in Kazakhstan and he asked about our plans. I told him that our goal is to play in the World Group. He was surprised, and replied that it would take time: you need to build courts and to prepare good coaches who will grow future champions, he said. And, most importantly, it is necessary to be patient, because results will not be quick to come. But I did not agree with his last statement…

What path did you choose then?

I understood there were only two promising players then, Alexey Kedryuk and Syrym Abdukhalikov. We especially supported Abdukhalikov, but having won the champion title in Kazakhstan, he did not justify our hopes in the future. And Alexei Kedryuk is already an aged player, although he is a good athlete and works a lot.

How could we break into the international competitions? It remained to find and invite promising tennis players who could adequately represent Kazakhstan in the international arena and who, through their success, would promote tennis in the country and attract young people.

Of course, no one would give us the world No 1 in tennis, but with the help of Shamil Tarpishchev, president of the Russian Tennis Federation, we had an opportunity to invite players who were not able to show their full strength then such as Yuri Schukin, Mikhail Kukushkin, Andrey Golubev and Evgeny Korolev. The women’s team included Yaroslava Shvedova and Galina Voskoboeva and was “enhanced” by Bulgarian athlete Cecil Karatancheva.

We had an individual approach to each player, and discussed with them the prospects and opportunities. Of course, we created all conditions that we had promised, including training process and good psychologists, and never laid any claim to their prize money… We all work together on the result, as one team.

We have talked about the past and present of tennis in Kazakhstan. And how do you see its future?

It takes several years to prepare a strong tennis player and it’s better to begin training when a boy (or a girl) is 5-6 years old, since some experts believe 8 years old is already too late.

We created our Tennis Academy of boarding type in Astana – with the secondary school, accommodation, training, excellent conditions and four meals a day. Children work with coaches, teachers, and psychologists. Parents believe in us and trust their children to us. Similar bases were set up in the cities of Almaty and Shymkent.

The main task is to promote sport in the country, to make it a widely spread sport. For that, we build new courts, organize tournaments and workshops, and prepare coachers.

As for my own dream, I want to see our Kazakh tennis players as winners of a Grand Slam. Let it be tomorrow, but I’m sure that it will come true! And our federation is doing its best for that.