ASTANA – The Kazakhstan national rhythmic gymnastics championship was held in the capital on April 13 and gathered young athletes who demonstrated their skills and gained experience in major competition. 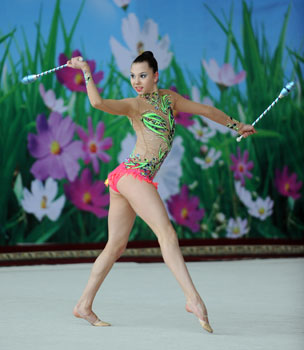 Kazakhstan's gymnasts are aiming high for victories at international cometitions.

“It was a big event for the capital because for a long time the competition did not receive such a considerable number of participants,” said the State Coach of Kazakhstan Yelena Panchenko.

The competition was organized to determine the champion in the individual programme, in the group exercises and in team competitions. In turn, candidates for the national team honed their skills and senior coach of Kazakhstan in rhythmic gymnastics Aliya Yussupova selected the most promising young athletes who will soon take part in major international competitions.

The Astana Times interviewed Aliya Yussupova and got her opinion on the status of gymnastics in Kazakhstan.

What was your primary goal going into the April 13 competition?

My primary goal was to raise the level of gymnastics in Kazakhstan in general, including at the international level. I wanted to bring special attention to the youth team and to the girls who have just come into the programme. They have not yet participated in major competitions, such as world or Asia championships, but they are very promising athletes.

In what region of Kazakhstan has this sport most successfully developed?

The leaders are the cities of Astana, Almaty and Shymkent. Also, there are promising girls in Pavlodar, Ust-Kamenogorsk, Semipalatinsk and Taraz. Recently, a good school opened in the Kyzylorda regional center. Thus, we have good prospects. At the beginning of June, our athletes will take part in the Asian Championship in Tashkent and in late August through early September in the World Championship, which will be held in Ukrainian capital. Also, we will do our best in order to represent the country at the next Olympics in the Brazilian city of Rio de Janeiro.