Today, no one argues that terrorism is global in scope. Kazakhstan, as part of the civilised world, can not avoid having to deal with the manifestations of this extremely dangerous social evil. 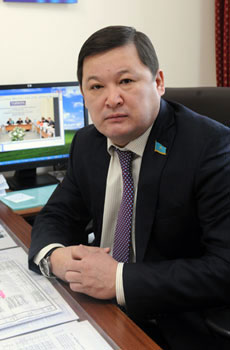 Research shows that many citizens have been alarmed by violent events in recent years. In January 2013, at a meeting with senior law enforcement officials, President Nursultan Nazarbayev said, “Stability and national security are the key conditions for implementing our new security policy. Today, it is important to analyse the interim results of our comprehensive reforms, it is critical to assess the achievements and identify problems and ways to further modernise the law enforcement system.”

Thanks to the successful policies of the president, the government has given long-term priority to national security and political stability. Therefore, we have managed to preserve inter-religious and inter-ethnic harmony in our society.

However, recent events have caused serious concern. Starting in 2011, after a series of terrorist attacks, our special services have carried out several special operations to destroy and neutralise terrorists. During the same period, there were more than 100 crimes connected with terrorism and extremism.

“The government and citizens should stand united against all forms and manifestations of radicalism, extremism and terrorism. Of particular concern is the threat of so-called religious extremism,” the president said.

Concerns about the interaction of terrorism with the drug mafia are confirmed by the situation in Afghanistan, Iraq, the Balkans and the Caucasus. According to the UN Office on Drugs and Crime, about 90 tons of heavy drugs annually are transported through the states of Central Asia. In 2011, opium poppy production increased by 61 percent compared to 2010. Therefore, after the withdrawal of NATO forces from Afghanistan, the risk of further growth in the production of Afghan heroin looks real. This will strengthen transnational, or cross-border, organized crime in the region.

The conditions favourable for terrorism and extremism have external and internal factors. Kazakhstan is an open country of the civilised world, and consequently it is subject to the same phenomena that take place globally. However, the decisive role in the spread of this evil is played by internal causes.

Many foreign educational institutions in Saudi Arabia, Egypt, Libya, Turkey and other countries with which we do not have international agreements train and send Islamic ideologues to Kazakhstan. Young people going to these countries as a rule on tourist visas receive in these centres a free radical Islamic education. The Spiritual Directorate of Muslims of Kazakhstan (SDMK) does not accept and does not employ the graduates of such institutions.

As a result, many graduates of foreign religious seminaries cannot find jobs and work instead in the informal Muslim environment in our country. According to official statistics, more than 600 people continue to study abroad at these centres.

A few Kazakhstan citizens have participated in the conflicts in Chechnya, Afghanistan and Iraq. Nine of the 44 recently convicted extremists in the Atyrau region participated in the fighting on the border between Afghanistan and Pakistan. In the past five years, 40 citizens of Kazakhstan involved in the activities of terrorist organisations and participating in illegal armed groups were detained on the territory of other states. In Kazakhstan, the government currently lists 68 high-risk individuals with combat experience.

Extremism and terrorism have their roots in the social sphere: Inequality, ostentation and permissiveness at one extreme, and poverty, lack of opportunities and the unsatisfied needs at the other end of the social spectrum lead to discontent, protests and aggression. Some 28 of the 44 criminals convicted for religious extremism in Atyrau were unemployed and the rest were self-employed. The General Prosecutor’s Office has created a clear profile of a typical Kazakhstan terrorist: a young man under 29, unemployed, lacking a good education and a stable social perspective.

The criminalisation of the followers of non-traditional religious groups and their fusion with organised crime groups concerns law enforcement bodies. The main motive in this extremist-criminal partnership is the need of terrorist organisations to finance their activities. They have traditionally used money gained from drug and illicit arms trafficking, kidnapping and racketeering. Members of gangs involved in such activities receive from extremist religious groups ideological justification for the crimes they committed.

Analyzing the activities of law enforcement agencies abroad, we should note some effective measures to prevent extremism and terrorism. First is the application of due process in implementing relevant laws so that the organisers and perpetrators of criminal acts and those who inspire them with extremist ideology are held accountable. The 2012 law to combat terrorism was therefore timely and effective. Its provisions are essential, reasonable and are improving the efficiency of the entire legal system in countering terrorism.

Currently, task forces specialising in the fight against extremist groups consisting of 77 officers of the Interior Ministry and National Security Committee have been formed in regional operational headquarters and special training was organized for them. This practice should be developed with regard to the international experience and specifics of our country.

The Prosecutor General’s Office reports that in the past five years, 148 people have been convicted of terrorist crimes and 160 of crimes associated with extremism. In 2012, a total of 112 crimes related to terrorism and extremism was recorded and the special services prevented 24 terrorist attacks in their preparation stages.

Law enforcement agencies are also actively fighting terrorism and extremism on the Internet.

At the request of the Prosecutor General, in 2004, for the first time, the Supreme Court clamped down on four organisations related to international groups – al-Qaeda, the East Turkestan Islamic Party, the Kurdish People’s Congress, and the Islamic Movement of Uzbekistan. Since then, 15 foreign organisations have been labeled as extremist by court decisions. By judicial decree the Hizb-ut-Tahrir political party and the Senim-Bilim-Omir non-governmental organization (NGO) were declared illegal and disbanded.

Today laws on national security, on combating terrorism, on countering extremism, on preventing the money-laundering of illicitly gained income to finance terrorism are in force. In 2012, new laws were passed on state border security and to reorganise the country’s internal security forces.

The Kazakhstan 2050 national strategy calls for the drafting this year of new legal codes of criminal procedure, criminal activities, penal law and government administration. They will then be submitted to Parliament for approval and enactment into law.

Thus, the necessary legal procedures, administrative government reforms and security agency reforms to counter extremism and terrorism have already been developed in our country.

The author is a Deputy of the Mazhilis (Lower House) of the Parliament of Kazakhstan.