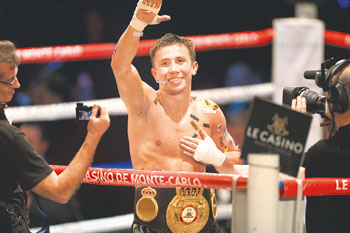 Golovkin won the fight, which took place in Monaco, in the third round. It was his seventh successful defense of the World Boxing Association (WBA) title.

Golovkin, 30, dominated the fight from the starting bell.Ishidф, 37, tried to fight back but his punches lacked focus. Golovkin was always well ahead on points and hammered his opponent before finishing him off.

“I like this city, this country. Thank you all,” Golovkin said after his victory. In the hall, Golovkin had many supporters including Kazakhstan’s Olympic champion cyclist Alexandra Vinokourov.

Prince Albert II of Monaco presented Golovkin with the championship belt to Golovkin.

Heavyweight world champion Vladimir Klichko said Golovkin was now the dominant middleweight of his generation. “Gennady Golovkin stands out in his weight class. It’s very hard to compare him to any other boxer. He has a solid record and more than 85 percent of his fights end in knock-out victories,” he said. 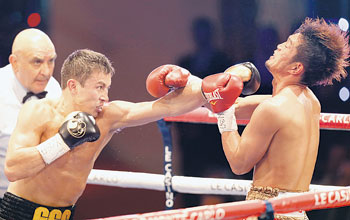 Golovkin (l) was ready for the fight and his strong punches were right on target.

“Golovkin wanted to be active this year, and this fight gave him the opportunity to defend his title again in front of a major European audience,” boxing promoter Tom Leffler said. “He has established himself as one of the most dangerous fighters in the middleweight division and he will fight anywhere in the world without any hesitation.”

Golovkin said he had wanted to be a champion boxer since he was a young boy. “It all started when I was 10 years old. I went with friends to the district boxing hall,” he recalled after his victory. “My first coach was Victor Dmitriyev. He was the man who managed to find an individual approach for each of his students and he made everyone interested in training. I cannot stop thanking him for that.”

The boxer said he next wanted to fight Argentina’s Sergio Martinez.

“All my friends were engaged in sport, so I did not have some difficult choices,” Golovkin said. “I quickly began to achieve good results. Today, I can say that I’m happy. Destiny laid it down. I am satisfied that now I can do the things I love and with great joy come home to my beloved family. And this is the most important thing for a man.”

Golovkin’s next fight will take place in June. He has now won 27 professional fights, 24 of them by knockouts. His previous victory was in New York City on January 19 when he defeated Gabriel Rosado of the United States in Madison Square Garden by a technical knockout (TKO) in the seventh round.