NORTH KAZAKHSTAN – At North Kazakhstan’s first auction of breeding cattle, 30 yearling bulls of the elite Aberdeen-Angus breed, received from the United States through the KazAgroFinance Company, were sold by the Mambetov and K farm for 12 million tenge. 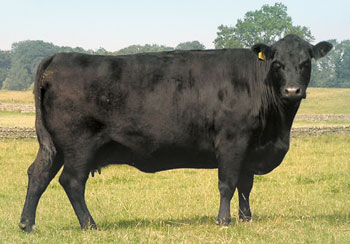 “Today we are witnessing a successful implementation of a very important project in the field of animal husbandry: we sell not just breeding stock – we sell genetics. All animals presented at the auction have a high index assessment,” Dimash Talasbayev, acting head of the oblast Agricultural Department, said at the opening of the event.

The auction followed the English method; with prices increasing as bidders competed. The starting price for each head was set individually, but sellers targeted a price of 1,300 tenge per kilogramme of body weight. The weight of the animals ranged from 400 to 500 kilogrammes. Over the course of the auction the price of some animals doubled.

“Our farmers are not accustomed to such auctions; for many of them this form of shopping was a novelty and some farmers came just to watch. However, we are pleased with the results: 18 animals in total were sold. We also have potential buyers for the remaining 12 bulls and some wanted to buy breeding stock through the classic method of direct purchase. We plan to organise the next auction in a year,” said head of Mambetov and K Erkebulan Mambetov.

Mambetov and K’s auction was funded by KazAgroFinance as part of the company’s commitment to invest in creating a network of breeding farms. In 2012, the farm received 198 head of Angus breed heifers from the United States on lease. Today, the farming partnership has the status of a breeding reproducer and its stock of breeding cattle is over 360 head.

The KazAgroFinance Company was created by the government of Kazakhstan in 1999. The main goal of the company is to support the development of Kazakhstan’s agricultural sector through providing access for agricultural producers to finance, machinery and technological equipment on a leased basis.