By Maral Zhantaykyzy in Culture on 19 April 2013

Kazakhstan’s Cinema Week dedicated to the 21st anniversary of the establishment of diplomatic relations between Kazakhstan and China was held April 17-22 in Beijing. 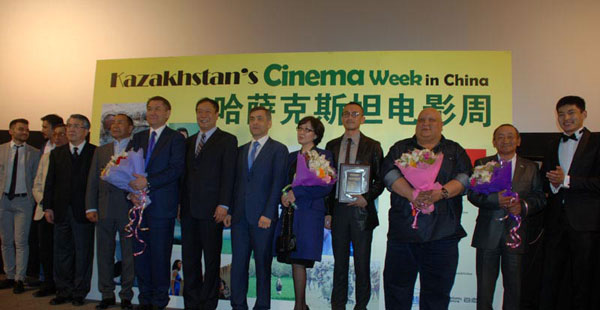 Kazakh artists and officials pose for a group photo at the launch of the festival in Beijing on April 17.

The event was organized by the Ministry of Culture and Information of the Republic of Kazakhstan jointly with the State General Administration of Press, Publishing, Radio, Film and Television of China. The event, which drew 300 participants, sought to promote modern Kazakh cinematography among Chinese filmgoers to deepen cultural and humanitarian cooperation between the two countries.

The film “The Sky of My Childhood,” by Rustem Abdrashev, which tells the story of the childhood and youth of Kazakhstan’s first and current president, Nursultan Nazarbayev, and which was based on Nazarbayev’s own works, opened the festival.

Welcoming the audience, Kazakhstan Ambassador to China Nurlan Ermekbayev said that the rapidly developing cultural and humanitarian cooperation between Kazakhstan and China promotes a good-neighbourly relationship and a comprehensive strategic partnership.

Deputy Chief of the Films Division of the State General Administration of Press, Publishing, Radio, Film and Television of China La Peikang noted that these films allow Chinese viewers to get to know Kazakhstan and the Kazakh people’s lives and this event plays an important role in strengthening the friendship between the peoples of both countries.

The organizers selected for the Chinese audience films that tell the story of the history, development and modern lives of Kazakhstan’s people. These films have been shown at international film festivals and have received awards. Among the films selected were “Zhauzhurek Myn Bala,” (One Thousand Young Warriors in Kazakh) and “The Liquidator,” directed by Akhan Satayev, “Shal,” (An Old Man in Kazakh) by Yermek Tursunov, “The Irony of Love,” co-directed by Russian Alexander Chernyaev and Kazakhstan’s Yerzhan Rustenbekov, and “Virtual Love,” by Amir Karakulov. The films were shown in their original language with Chinese subtitles in the cinema network Broadway Cinemas and in cinema complexes Oriental Plaza and Grand MOMA.

After the films were shown, the Chinese audience was given the opportunity to meet the films’ actors and directors. The Kazakhstan delegation to the event was led by Ermek Amanshayev, the president of Kazakhfilm named after Shacken Aymanov. A press conference was held in Beijing on April 17 on the opening day of Kazakhstan’s Cinema Week with actors Berik Aitzhanov, Farhat Abdraimov, Erbolat Toguzakov, Ayan Utepbergenova, Baykenzhe Belbayev and film director Satybaldy Narymbetov. Ambassador Ermekbayev also attended.

Earlier, on the eve of President Nazarbayev’s visit to Beijing, Ambassador Ermekbayev gave an interview to the Xinhua agency. “I would like to praise the cultural and humanitarian cooperation between our countries. In line with the agreements reached in June 2012 between the heads of states, the preparations for the Days of Kazakhstan Culture in China set to take place in November 2013 are in full swing. The Days of Chinese Culture in Kazakhstan are planned for 2014,” the ambassador said.

China and Kazakhstan regularly participate in cultural exchanges and increasing cooperation in the field of cinema, including the co-production of documentaries and feature films, has the potential to deepen that relationship. In addition, youth organizations in each country also interact regularly. There is also cooperation in the field of education with young people from Kazakhstan studying in China and Chinese youth studying in Kazakhstan. Today, about seven thousand Kazakhstan students study in China, including more than two thousand in Beijing. “And they all go back to Kazakhstan with a strong knowledge of the Chinese language, culture and history. They go back as true friends of China,” said Ermekbayev.

According to Ermekbayev, Kazakhstan and China are actively cooperating within the framework of international cultural organizations, such as UNESCO. Kazakhstan, along with China and Kyrgyzstan, is also working on an application for recognition of the Great Silk Road as a worldwide cultural heritage monument.

China and Kazakhstan have established a comprehensive strategic partnership and have achieved significant results in bilateral cooperation. The two countries maintain close cooperation in the international arena, jointly promote the development of the Shanghai Cooperation Organization.