By Nadezhda Khamitova in International on 24 April 2013 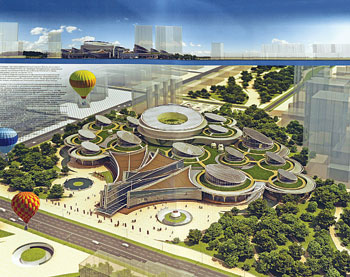 Work has already started on drawing up the master plan and landscape designs for the EXPO site and they will be presented to the International Bureau of Expositions (BIE) in Paris, Yermegiyaev said. The other important task is to prepare registration files to monitor progress on the planning, he said.

“The first report on progress will be presented in May and the progress reports will be assessed in October,” Yermegiyaev said.

“Our consultants have developed three master plans and the first one has priority. Finally, President Nursultan Nazarbayev will assess progress and decide which plan will be used,” he said.

Yermegiyaev said planners will use existing buildings as well as the new pavilions and display centres for the exposition.

“First we will complete the master plan which will include the architectural designs, technical support and costs of the construction programme. It will take until the end of this year to prepare all these,” he said. “Next year, we will complete the final planning the EXPO complex. We may divide this process into steps. By the beginning of May 2014, we will begin the construction work.”

On January 18, President Nazarbayev invited international companies to cooperate in building the EXPO 2017 complex when he addressed the diplomatic corps in Astana. “This is a triumph for the international standing of Kazakhstan,” he said.

“In 2012, our economy attracted more than $20 billion in foreign direct investment (FDI). That result has been achieved by no other state in the world,” he added.

Yermegiyaev said the government will recruit the talents of young people in its preparations for the exposition. “This will involve a lot more than volunteer work. What we are looking for is new ideas,” he said. “Since the project is truly national, all of the society should be involved in it, especially young people.”

Kazakhstan expects to welcome at least 2 million tourists during the EXPO. “We will design a tourists’ kit which will include information on essential destinations to visit in our country and information to facilitate travelers. Special transportation fares will be introduced to cut the costs of travel and living,” Yermegiyaev said.

On April 22, at the meeting on the development of Astana held in the Palace of Independence, President Nazarbayev criticized the lack of progress in government preparations, however, ordering the dismissal of the EXPO 2017 organization committee.

“Analysis of the first three months of the current year showed that we have started to make the same mistakes our predecessors did. I have defined the body responsible for the organization of EXPO, the Astana EXPO 2017 national company,” President Nazarbayev said at the meeting.

The president noted the duplication of functions in connection with growing number of superiors.

“I believe the organizational committee has to be dismissed, let the company do it on its own,” he emphasized.

On December 6, 2012 the President tasked the Government with ensuring the transparency of financial support provided within EXPO preparations.

“With the substantial allocation of funds, the mechanism of the funding should be considered. The use of money both from the budget and beyond budgetary sources should be as transparent as possible,” Nursultan Nazarbayev noted.