ASTANA – On April 9, a weeklong exhibition “Kazakhstan: A Space Harbour” opened at the Nazarbayev Center. The exhibition is timed to coincide with UN International Space Day marked on April 12. 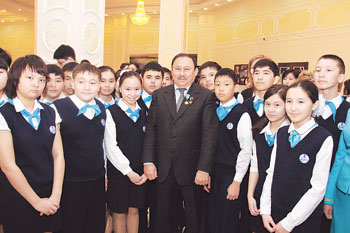 Talgat Mussabayev is surrounded by students of Astana’s specialised ‘space’ school No 50, who dream of going into space.

Officials, students and the media attended the opening ceremony including Chairman of the National Space Agency of Kazakhstan Talgat Mussabayev, ambassadors of Finland, India, Indonesia, Israel, Latvia, Russia, the head of the OSCE mission, as well as diplomats from Saudi Arabia, the United States and other countries. Students from Astana’s specialised ‘space’ school No 50 not only participated, but have also provided hand-made models of spacecraft for the exhibition.

“The participation in space activities to a significant extent determines the political prestige of a modern state, its economic, scientific and technical power. However, not only economic pragmatism, but a special, I would say, philosophical and ideological vision of the leader of our country directs the priorities and objectives of our national space programme,” Roman Vassilenko, deputy director of the Nazarbayev Center, said welcoming guests to the exhibition.

“Space industry, with its huge potential, will be one of the most important components of the implementation of Strategy “Kazakhstan 2050”. Its development in cooperation with international partners will benefit our society and every citizen of Kazakhstan… Space journeys of Kazakh astronauts Tokhtar Aubakirov and Talgat Mussabayev, the subject of patriotic pride of our nation, became part of our national identity at the time when our state was gaining independence,” he added.

Chairman of the National Space Agency of the Repiblic of Kazakhstan, Halyk Kaharmany (People’s Hero) of Kazakhstan and, at the same time, Hero of Russia, Talgat Mussabayev congratulated the gathering on the upcoming International Space Day and recalled: “In 1961, on April 12, I was 10 years old. On that day, we were gathered at a lineup and announced that Yuri Gagarin went into space. All began to run and scream ‘I am Gagarin, I am Gagarin,’ and I shouted, ‘Talgat Mussabayev checking in from space.’ My dream came true 33 years later, after years of hard work and training and preparations.”

Mussabayev flew into space three times, spending there 341 days overall. On his last mission as commander in 2001, he took with him Dennis Tito from California, the world’s first space tourist, and they spent eight days at the International Space Station. 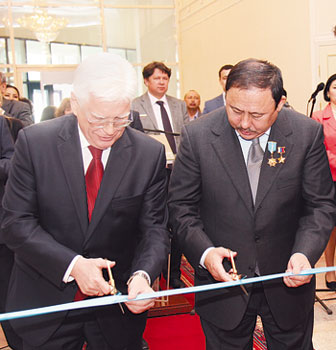 Talgat Mussabayev and Mikhail Bocharnikov cut the ribbon as they unveil an exhibition “Kazakhstan: A Space Harbour” at the Nazarbayev Center on April 9.

“Our contribution to the space industry is significant. Today it is maintained at the highest level in the Russian Federation. We have begun work on a new launch site in the east of Russia, but the main thing for us is still the Baikonur space port, and with great satisfaction we welcome the cooperation on this issue with our Kazakh partners to use this important space center until 2050,” Ambassador of Russia to Kazakhstan Mikhail Bocharnikov noted in his remarks at the event.

The exhibition begins with a section devoted to the Soviet pilot-cosmonaut, the first man in space Yuri Gagarin, as well as to the birth of a new era of manned space flights. Photo stands present pictures of the first representative of the Kazakh people to fly into space, honoured test pilot and Hero of the Soviet Union Tokhtar Aubakirov, Talgat Mussabayev, Soviet cosmonauts Valentina Tereshkova, Vyacheslav Zudov, Svetlana Savitskaya, prominent space scientists Tsiolkovskiy, Korolev, Petrov, Glushko, Ryazanskiy and others.

Of particular interest is the graphical scheme of Baikonur, photos of the world’s first largest cosmodrome and photographs that reveal the secrets of outer life such as the way cosmonauts have lunch in a state of weightlessness, or what diet they have.

In addition, the exhibition demonstrates gear of cosmonauts, including Mussabayev’s headset with microphone, a space diet, maquettes and models of satellite stations Phobos, Proton LV, Zenit LV, Buran kenesі LV and others. The books from the funds of the Nazarbayev Center cover the history of space exploration.

The exhibition is free of charge and will be open until April 14.