By Nadezhda Khamitova in International on 24 April 2013

ASTANA – On April 25-26 Astana, will host one of its biggest annual events, the Eurasian Media Forum, which gathers hundreds of politicians, experts and media figures from dozens of countries to discuss pressing regional issues. President Nursultan Nazarbayev is expected to address the opening session of the forum. 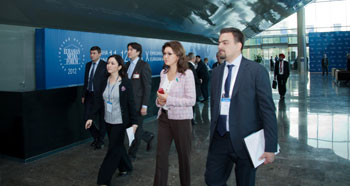 This year’s Eurasian Media Forum is putting new challenges of regional security on its agenda.

Will this forum differ from previous ones?

Each forum is different from the previous one. Every year we select the most pressing news and issues that concern the world. Our speakers create a unique atmosphere and provide us with exclusive opinions and points of view. This all makes every forum different from the others.

Why is the forum important?

The most important thing about our forum is that we are located in the heart of Eurasia. The idea behind our conference is to create a platform for dialogue between East and West. In the past 11 years we have hosted more than 5,500 foreign delegates from more than 60 countries. This is significant.

We do not negotiate or sign any memoranda or agreements between parties participating in the forum. But it is very important that we seek to ensure the exchange of opinions and affect attitudes, so we work to contain a lot of interesting content. However, we do not try to have any direct impact on the political or economic situation in Eurasia.

What responses have you received from participants in previous forums?

Last year, we held the tenth Eurasian Media Forum and gathered enormous amount of positive responses about it. We appreciate that our delegates have given us such good feedback. It proves that our platform is very interesting to the world and it shows how open we are for dialogue between East and West. There are lots of speakers and moderators who have attended the forum several times. Some participants have attended every one of them and they are returning this year.

What are your expectations for this year’s forum?

I think that we will be able to raise some extremely important questions about regional security and show the world that we live in a very open but secure state. I hope to hear about new technologies and ways to build the green economy from our foreign guests because it is important that Kazakhstan is the nation in the Commonwealth of Independent States that pays the most attention to green energy and ecological questions.”

As usual, this year’s Eurasian Media Forum on April 25-26 will attract a high profile audience. In addition to President Nazarbayev, it will include Eurasia Media Forum Chairwoman Dariga Nazarbayeva, Ukrainian Foreign Minister Leonid Kozhara who is the current chairman of the Organisation for Security and Cooperation in Europe (OSCE) and conference moderator Riz Khan of AlJazeera International.
This year, the forum will cover issues of major regional concern including security in Central Asia after the withdrawal of the U.S. and NATO troops from Afghanistan in 2014. It will address fears that the withdrawal will cause the situation in Afghanistan to deteriorate and encourage the activities of extreme Islamists in the area.
The forum will also address the consequences of the Arab Spring series of democratic revolutions under the subject title “The Middle East: managed chaos turning into unmanaged disaster?” It will explore the rising influence of Islamic parties in Tunisia, Egypt, Libya, Yemen and Syria.
The forum will also discuss the positive impact of EXPO 2017 on Kazakhstan and its neighbours. The greatest concern for the public is not whether the country can organise an event on such a scale but what its results will be for the country afterwards, whether the exhibition brings fruitful results and how it will help the country make the transition to green energy. Speakers will explore the feasibility of creating the green economy in Kazakhstan.
Finally, the forum will discuss the concept of the Eurasian Economic Union. As the existing Customs Union of Russia, Kazakhstan and Belarus gradually moves towards creating a full EEU, regional politicians, economists and bankers will take a hard look at the experience of the European Union.
The forum will also host a discussion on information security, the impact of the media and social networks on global politics and on media trends of the 21st century. This will focus on the responsibility of the media towards the information it provides. It will also explore the way modern journalism is changing under the impact of the rapid development of network technologies and the social media and the growing role of popular bloggers.
Among the many renowned speakers and experts attending the forum will be French journalist Julian Nundy; New York Times-bestselling author, Greg Palast; Institute of Global Economics and Business Director Yuri Moseikin from Russia; chairman of the International Relations Committee of the Kyrgyz Republic Kanybek Imanaliyev; former Greek Deputy Prime Minister Theodoros Pangalos; Cihan News Agency General Manager Abdülhamit Bilici from Turkey; American Iranian Council President Hooshang Amirahmadi; Al Jazeera International Senior Presenter Stephen Cole; Israel Press Council Secretary General Arik Bachar; British Member of Parliament George Galloway; Heritage Foundation Fellow Ariel Cohen; and Eurasia House International President Armen Sarkissian from Britain.
At the Tenth Anniversary Forum last year, over 450 journalists, politicians, academics and business leaders from 40 countries gathered in Astana on October 11.
Prime Minister Serik Akhmetov addressed that gathering and said that since its creation in 2001 the Eurasian Media Forum had become a unique platform for global dialogue and the exchange of views on important issues.
“Themes such as justice, morals and true values are as important as those relating to economic issues and should occupy the same amount of media space,” forum chairwoman Nazarbayeva told the October gathering.
Russian journalist, Maksim Shevchenko described the forum as proof of the “fundamental role of Kazakhstan as an intellectual political centre.” There was no other conference anywhere in the former Soviet republics comparable to the Eurasian Media Forum, he said.
The first five forums held annually after 2002 each attracted more than 500 media, political and business experts from 60 countries.
The Eurasian Media Forum is the most prominent international media initiative in the region and it has the goals of exploring the strategic role of Eurasia in world affairs, finding new approaches to international relations, promoting equality of access to reliable public information throughout the area and encouraging the highest standards of journalism.