ASTANA – The Employment 2020 Programme got off to a strong start last year. 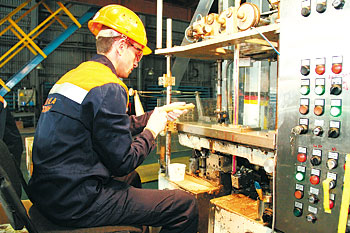 Minister of Labour and Social Protection Serik Abdenov said that in 2012 the number of people willing to participate in it grew by 66 percent; the number of social contracts concluded under it increased by 70 percent and the number of low income and rural workers involved in it doubled. Micro credit loans grew almost 400 percent last year compared with 2011 from 3.6 billion tenge ($20 million) to 12.4 billion tenge ($80 million).

The programme began in 2011. At the end of 2012, Prime Minister Serik Akhmetov approved some changes to improve its efficiency.

The programme has trained 63,000 people at 448 educational centres and created 52,000 social jobs. The role of employers in the programme will be expanded in accordance with President Nursultan Nazarbayev’s instructions to the Second Congress of Zhas Otan, the youth movement of the ruling Nur Otan Party.

Previously, the selection of applicants, occupations, professions and educational organisations for the programme was carried out by the state. In future, these functions will be carried out by employers. Prospective employers will also be allowed to apply to private recruitment agencies. They will be able to use the Labour Ministry’s database of vacancies in the labour market. Prospective employers will also be allowed to choose the training school for their future employees.

The youth labour exchange will create a new single web portal to make it easier for young people to find jobs and career guidance.

Some 6,000 people have taken the programme to teach the basic principles of business and entrepreneurship and 6,200 small business proprietors have microcredit loans. Local boards in different regions will create business development maps to identify priority areas and projects to help new business owners and employers working with the programme. The employers will receive professional help in preparing their business plans, including free accounting, legal and marketing services for a year.

The Employment 2020 Programme will focus only on the unproductive self-employed. These are defined as members of the work force whose activity is sporadic and who manufacture products only for their own use without generating added value, and unpaid workers in family enterprises – a total of 1.3 million people.

To improve labour mobility, a public-private partnership (PPP) programme has been introduced. In 2012, it relocated 2,000 workers.

The programme is also providing young workers with residence hostels, provided they have employment contracts and participate in the housing savings programme. Workers who live in these hostels for up to five years will be able to accumulate capital in the Construction Savings Bank which will enable them to buy housing on preferential terms.

However, the hostels construction programme requires additional financing and the overall youth employment programme needs to be coordinated with other state programmes including the State Programme for Advanced Industrial-Innovative Development (PAIID) and the Affordable Housing 2020 Programme.

The East Kazakhstan, North Kazakhstan, Kyzylorda and Pavlodar regions are carrying out prototype parts of the programme. The prime minister and the government have approved a 40 percent increase in funding this year by 40 percent.