By Nadezhda Khamitova in International on 5 April 2013

ALMATY, April 5 – Representatives of the six world powers including China, France, Germany, Russia, the United Kingdom and the United States met in Almaty today with the negotiators from Iran for the second round of Almaty talks on that country’s nuclear programme. 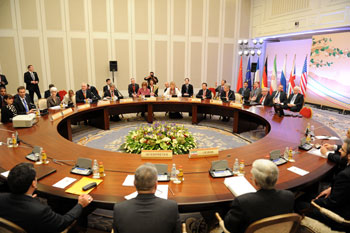 Like in February, the Iranian delegation is headed by Secretary of the Supreme National Security Council (SNSC) Saeed Jalili while the EU foreign policy chief, Catherine Ashton, represents the P5+1 group – Britain, China, France, Russia, the US and Germany.

During the earlier round of high-level talks held in Almaty at the end of February, it was agreed by the negotiators that Iran would respond to a revised proposal introduced by world powers in February which calls on Tehran to suspend its enrichment of uranium and disable the underground Fordow facility in exchange for limited sanction relief.

At that point, the Iranian side demonstrated little readiness to accept those proposals unless its right to develop peaceful nuclear programmes was recognized.

On Thursday April 4, Saeed Jalili said the upcoming negotiations in Almaty must recognize Iran’s “right to uranium enrichment.” According to him, “recognizing Iran’s nuclear rights, especially the rights of enriching uranium” would benefit the solution of the country’s nuclear issue.

“I remain always cautiously optimistic. But I am also very clear that it is very important that we do get a response (from Iran),” Ashton told international reporters in Ankara, Turkey, prior to the negotiations.

“We’re back here in Almaty for the second time. When we were here for Almaty I, we put forward a very clear and concise proposal for a confidence building measures, as part of our approach to try and tackle our concerns about the nature of the nuclear programme of Iran. What we are looking for today, when we meet with Dr Jalili and his team, is an opportunity to hear from them their response, which we trust will be a considered, balanced and well thought out response to try and reach an agreement on how we move forward,” said statement of EU High Representative Catherine Ashton ahead of the talks.

Today, around 200 foreign and local journalists were waiting for the news from the round-table where the talks started at 10.30 a.m.. One hour later, at 11.30 a.m. Almaty time, Michael Mann, spokesman for EU foreign policy chief Catherine Ashton arrived at the press center organized in the Intercontinental Hotel to answer questions from journalists.

Addressing the journalists, Mann said negotiations were underway, thus “no official announcements could be made at the moment.”

Later in the day, Iran’s deputy nuclear negotiator Ali Baqeri told journalists that “Jalili made new proposal to P5, it goes in conjunction with many aspects of that offered by the ‘six’.” 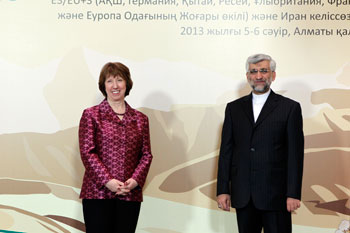 At 8 p.m. Ali Baqeri arrived to the Intercontinental for the evening briefing and told journalists that “Islamic Republic of Iran held a number of bilateral meetings during the day and will continue those later in the night.” No more additional information on progress of the talks was added.

“Negotiations is a time-consuming process. For a long time parties could not decide where to hold these talks. The fact that they reached consensus to hold it in Almaty is a sign of a progress in negotiations,” Zhanbolat Ussenov, spokesman of Kazakhstan’s Ministry of Foreign Affairs said. He has also noted that the role of Kazakhstan is that “through hosting the talks, we contribute to the strengthening of regional stability and security.”

“Kazakhstan does not exist separately neither from region nor from the world, we are part of the world society. In 20 years, our country has achieved merited authority as a consistent advocate of disarmament and security processes. Hosting the talks on Iran’s nuclear programme in Almaty is a subsequent contribution to the processes which we are consistently maintain,” he emphasized.

Iran and the P5+1 have already held several rounds of talks the last round of which took place in Almaty on February 26-27.

The most recent round of P5+1 talks on Iran’s nuclear programme at the expert level was held in Istanbul on March 17-18. The P5+1 (also known as the EU3+3) presented to the Iranian side a more detailed version of the proposals they presented at the Almaty talks in February.

“We collectively have developed a number of constructive suggestions for Iran. Today, we have voiced our concern to the Iranian side, which, in turn, should study and analyse our proposed measures and provide an answer at the next meeting in Almaty,” EU High Representative for Foreign Affairs and Security Policy Catherine Ashton said at that time.

The current round of talks is expected to continue into April 6.

Kazakhstan has played an active role in non-proliferation and was one of the first countries to unilaterally and totally renounce nuclear weapons when it gave up the fourth largest nuclear arsenal in the world in the early 1990’s. President Nursultan Nazarbayev took another historic step towards nuclear disarmament when he issued a decree to close the Semipalatinsk nuclear test site on Aug. 29, 1991 in Almaty.