By Maral Zhantaykyzy in Nation on 10 April 2013

ASTANA – From March 15 to April 6, the Alliance Française (the French Alliance) and the embassies of five French-speaking nations are holding a cultural festival in Kazakhstan, called the Feast of Francophonie. 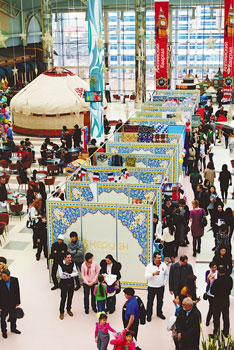 As part of the Feast of Francophonie, a colourful exhibition was organized at one of Astana’s malls.

On March 23, the embassies of France, Belgium, Canada, Romania and Switzerland held a trade fair in Astana. Visitors purchased goods on display from these countries and enjoyed free French croissants, cheeses and wines.

The Office for Campus France offered education programmes and courses in French. Students from the French Alliance School performed songs in that language. Embassy officials held a quiz on the history of their countries and a lottery.

“Thank to this annual festival I started learning French two years ago. Today I invited my friends for this holiday, and I want to show them the world of my interests. Together we participated in a quiz and won gifts,” Anara Abilova, a student at the Alliance Française school, told The Astana Times.

Films from the participating countries were screened in the cities of Astana, Almaty, Karaganda, Kostanay, Shymkent and Oskemen including the Oscar-winning “Amour,”“The Barons,” “Mr Lazar” and “A Small Room.” The films were shown in French with Russian subtitles.

The Alliance Française also held a French language music contest in those six cities and the regional winners came to Astana for the final. The winner received a linguistic trip to France.

The jury determined winners in two categories: Darya Ossipova from Kostanay won in the category “the no-francophones” (people, who don’t speak French). She got a round ticket to Paris. Almira Kairzhanova from Astana became a winner in the category “the Francophones.” With the song “The Levity” she won the linguistic full board holiday in France.

“I’m very happy because I have been involved for the second time. Last year I didn’t win, and now my dream came true and I will finally see Paris. I have studied French from the school, for already 7-8 years, now, I study the law at university, but I didn’t back out my dream. I love French songs, especially from the repertoire of Camille. I like her unique style and songs,” Almira shared ther feelings with the Astana Times

After the contest, the participants were invited to the recital of Almaty jazz singer Irene Aravina “Uno Tango”, to enjoy the French chansons of the early 20th century.

Diplomats from the five embassies also participated in the annual Nauryz spring festival celebrations around the country.

Bakhytzhan adores his little sister, loves “hanging out” online, playing computer games, watching action movies and historical movies, going to a water park with his father, spending weekend with his mother in their cottage house. Just like all young men of his age. But he is not like everyone else. Bakhytzhan is disabled, he has severe poliomyelitis. He is a big fan of the “Barcelona” football club and especially, Leonel (Leo) Messi. The motto of the club “Més que un club”, which in Russian means “More than a club,” in tune with the title of the exhibition – “More Than a Blog.” It expressed the desire of the artist and the hero of his reportage not just to tell the story of their meeting, but cover something more important.

“Seeing Bakhytzhan’s life story every day, the visitors will feel that the people with disabilities are ordinary people who have the same tastes and interests and don’t differ from our habits and activities. And if we feel uncomfortable around them, feeling shame, embarrassment, curiosity or fear, then it is indicative of our inferiority and lack of cultural behaviour,” Nicolas Journet said, hoping that his exhibition will encourage the viewer to sympathize, and to reflect.

The comic book exhibit will be shown in all six cities where French language cultural events are being held. The Embassy of France in Kazakhstan helped organize a travelling exhibition in Almaty, Astana, Shymkent, and after Karaganda it is awaited in Oskemen, and Pavlodar. It is possible that the exhibition will be presented in St. Petersburg, and around the world, the socialized comic “Més que un blog” already is widely known among Internet users, where it was demonstrated for the first time.

International Francophonie Day is celebrated every March since 1970. It unites more than 200 million French-speaking people around the world.