ASTANA – “Motherland is not an empty word for me,” said Serik Rustambekov, chairperson of the Board of the Union of Architects of Astana, Honoured Architect of Kazakhstan and academician. “Whether we want it to be or not, our destiny is closely linked to the destiny of the country. Of course, there are failures, but there are victories as well.” 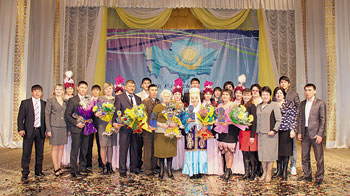 Forums called My Destiny Is My Country’s Destiny are taking place throughout the country with the culmination scheduled for early July in Astana.

Rustambekov’s comments came during the recent “My Country’s Destiny Is My Destiny” forum held in the Korgalzhyn district of Akmola oblast, during which Rustambekov shared his life story. It is a story that unfolds parallel to the story of his country. “I am delighted to be helpful to the country, I am proud that I have worked with worthy people, real patriots… Our country gives every citizen of Kazakhstan the opportunity to realize their dreams, to use their powers, to believe in themselves and to become an independent person.” The phrase, which sounded like an instruction for youth, is nothing but a statement of experienced fact.

Today, Serik Rustambekov is the recipient of numerous awards and titles for his professional activities. Perhaps one of the most significant awards for him is the title “Honorary Citizen of Korgalzhin District.” More than four decades ago, the curious boy had no idea what his life would be. “I was part of the last generation of children of the Khrushchev era. At that time the only ways to the world were the radio and the district library, where I read all fiction. When I finished the fiction, I started to read art books. Vividly illustrated almanacs on architecture impressed me as an 11th grade student. At school I found out that the Kazakh polytechnic institute enrolled students to the newly introduced faculty of architecture. So, I got there. The teachers were prominent architect-practitioners Bassenov, Seidallin, Tumanyan and others.”

Rustambekov’s younger brother, Akmurza, currently an honoured figure of Kazakhstan and president of the Union of Architects of Kazakhstan, also contributed to the construction of the symbol of Astana, Baiterek, following the example of his older brother.

“There is a whole dynasty of architects. My brother’s wife is an architect. My son Samat chose this way for himself. I remember him asking me when he started to study whether he would survive with this kind of profession; whether maybe it would be better to stop his education and start his own business. This happened in uneasy times for the whole country. It was difficult to stay afloat… I asked my father the same question in the 1990s, but his ‘no’ was stronger than the desire to earn easy money. However, I experienced this. We became entrepreneurs with my friends. We bought something, sold something. The country was feverish and the question “How to live?” was acute. Business sometimes bordered with crime. I didn’t do it for long and, having understood that was not my way, I came back to my profession.”

At that time, Rustambekov was a prominent architect in the country. After graduation, he was invited to the pan-union institution Kazgiprotorg, designing objects of trade and public catering. He was working not only in Kazakhstan, but also in Kyrgyzstan, Tajikistan and Turkmenistan. In Kazakhstan, he worked in Almaty, Tselinograd, Shymkent, Arkalyk, Abakan, Ashkhabad, Frunze and other cities. He passed all the stages of professional growth, from young specialist to chief architect.

The 1990s were the starting point of big changes. Unexpectedly, he became a member of the Supreme Council of Kazakh SSR, representing the union of architects. “We were lucky to work at a time momentous for all people of Kazakhstan. We adopted the Declaration of Independence, state symbols and the first laws of the young republic. As the deputy chairperson of the Committee on Construction and Architecture, I participated in the elaboration of laws relating to these spheres. At the same time, I studied at the faculty of law of Kazakhstan State University.”

When Rustambekov heard the news that the capital would be transferred, the former member of the Supreme Council supported the decision of the president and considered it brave. Rustambekov created a team and started preparing a general plan for the future Astana. They presented the plan to President Nursultan Nazarbayev, who supported the idea and afterward announced the open national competition for the best design. In the end, Rustambekov’s team’s project was acknowledged the best. The team included architects from Almaty and Astana. Rustambekov’s list of projects included the living complex Samal, the Millenium Gallery, the square with the Tree of Life fountain, business centres and other areas. However, his largest project is the Ishim embankment.

When he was asked, “Did you ever consider leaving the country?” Rustambekov was very surprised and after a short pause said, “Why? ‘Motherland’ is not an empty phrase for me. This is my life, my children and grandchildren!”

In Tekeli, in the Almaty region, the “My Destiny Is My Country’s Destiny” forum started with planting fir trees along Dinmukhammed Kunayev Street, after which participants accompanied by bikers with state flags followed them to the local cultural centre. In the hall of the centre the exhibition “My City – My Happiness” greeted forum guests. Konstantin Nesterov, one of the participants, shared his story of how he gradually achieved success along with the development of the country.

Citizens of the city know Nesterov as a poet, singer and perfect organiser. He is a very responsible person with high creative and executive qualities. In 2009, he created the New City vocal-instrumental ensemble, which has become popular.

In 1997, he established and became director of the theatre studio Edelweiss. Tekeli’s citizens remember many of his performances.

For his contribution to the development of culture, in 2010 Konstantin received a Letter of Thanks from the Mayor of Almaty oblast.

On Nov. 10, 2011, by presidential decree, he was awarded with the 20 Years of Independence of the Republic of Kazakhstan medal. For his contribution to the patriotic upbringing of youth in 2012, he received the 20 Years of Contribution to the Internal Military Forces pin. Currently, he is the member of the city maslikhat (local representative body). Nesterov is an active participant in public life and a member of the regional political bureau of Nur Otan. For his good work in the leadership of the pre-election campaign of the president of Kazakhstan, he received a letter of thanks from President Nursultan Nazarbayev.

The unique forum, “My Country’s Destiny is My Destiny,” started its nationwide tour on Feb. 14 this year. The forum gathered interesting stories from people of Kazakhstan whose lives have been connected with the destiny of the country. The forum is designed to show the success Kazakhstan has achieved through the prism of the changing lives of the nation’s people. The forum was originally launched in July 2012 by the Nazarbayev Center and attracted wide attention, after which it was decided to hold forums annually in all regions of the country.

Regional forums will be held in two stages: first at the district level, second at the level of the oblasts and the cities of Astana and Almaty. Some speakers will be delegated to Astana for participation in the national forum, which will be held as part of the celebrations of the Day of the Capital.