By Marina Parkhomenko in Nation on 24 April 2013 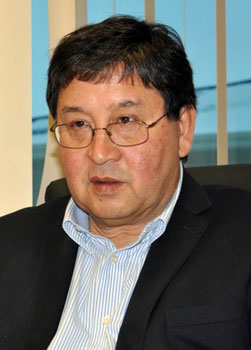 American billionaires are setting a global example for generous philanthropy that should also be followed by wealthy business moguls in Kazakhstan, a leading expert says.

In 2012, billionaire Warren Buffet donated $3.1 billion to charity. Mark Zuckerberg and his wife Priscilla Chan donated nearly $500 million, mainly to healthcare projects. The Facebook founder is one of the richest people in the United States and signed a donation pledge to give most of his money to charity.

Prof. Kenneth Alibek, the famous microbiologist who had worked for a long time in the U.S., and who currently is the chairman of National Medical Holding, discussed the issues of social responsibility and private charitable contributions in an interview with The Astana Times.

Why is business social responsibility so relevant for the healthcare system?
Every year, state funding in Kazakhstan’s healthcare system is increasing. But, we should understand that there is no country in the world that can fully maintain the healthcare system only through state financing. Even the United States cannot afford to do this: It runs the national health insurance system as well: There is funding from the individual state governments. Enormous contributions from business flow in. Large charitable contributions support the development of a variety of clinics. This is the only way to manage healthcare issues. These examples should also be followed in Kazakhstan.
In our country, there are many examples of business leaders showing social responsibility in the field of sports and entrepreneurs also render assistance to social institutions such as orphanages, hostels for the elderly and disabled people. But, as far as the healthcare system goes, it is hard to think of any large-scale charity events. Can more be done in this area?
It is necessary to conduct more outreach to make the business community face social problems. I have talked to many businessmen and I know that the situation in Kazakhstan is not hopeless. Entrepreneurs contribute to the development of sports. In that area returns are fast. In the healthcare system too, the results of philanthropy come quickly: if you help a patient with a serious illness by contributing money for surgery, you have saved his or her life.
To my mind, the problem is often related to the fact that a businessperson is not always sure how, where and how transparently the money will be used. There are different options. It is possible to support patients with serious or rare diseases, who need treatment abroad. It is possible to help them by transferring funds. It is also possible to purchase and supply the necessary equipment or offer to build a facility, or repair the premises.

Boards of trustees created by medical institutions also monitor the expenditure of funds. Do they have a role to play in this process?
Hospital boards need to develop new concepts to thank donors and encourage many more to contribute. In the United States, the hospitals and universities have memorial plates with the engraved names of sponsors on them to create enduring legacies. In Kazakhstan too, we can build new centres for surgery, or lecture halls for medical schools and they will bear the name of the person who contributed the funds for them. Sponsors can also create their own funds and use them to directly pay the salary of an outstanding professor, doctor or researcher and the position they fund will include the name of the sponsor. There are a lot of options.
This is a noble and grateful endeavour. There are lots of rich people in this country and each of them within their own resources can do something for their fellow citizens. This is the work that should be started now.

Who should launch these initiatives?
They must come from the heart of society. It is a matter of public figures setting the example. It is necessary to raise the prestige of charity and change attitudes towards it in society.
Being a citizen of another country, I do not feel entitled to say what the Kazakhstan Parliament should do. That would be wrong and unethical on my part. But, it would be good for the legislative bodies to establish a system of preferences in taxation for businessmen who invest in the development of different spheres, including in healthcare.

How does one encourage and persuade wealthy people to share their wealth with others?
There is an old proverb that says, “If you want to do a bad deed to your children – leave a lot of money to them.” Children who are born in such families often lose the ability to live a useful life. They lose the possibility of becoming people able to independently create something. Big money often corrupts. Man does not live to save lots of money and then not to know what to do with it. Life is short, they say: a man comes to this world alone and leaves it alone. Every individual should think about what he or she will leave behind.
There is one fact that must not be forgotten: Big money is earned by the efforts of hundreds of thousands of people who work in the mines, factories and other unhealthy environments. Wouldn’t it be right to spend some finances to better their health? When a man realizes that, everything might change and the question about social business responsibility might lose its edge.

Kenneth Alibek was born in 1950 in Kazakhstan. He graduated from Tomsk medical institute and specialised as a military medic. In the Soviet Union, Alibek worked in different secret fields of biology and biotechnology including medicine development and biological defense research. He earned a PhD in biological science.
Alibek began to work in the United States in 1992 and became a U.S. citizen. He became a professor of medical microbiology and immunology at George Mason University. He has taught courses at Harvard, Princeton, George Washington University, Georgetown, The Sorbonne Columbia University, Rochester Technological Institute and at universities in Tokyo and Singapore. He has been involved in developing new cancer medicines and for other chronic diseases. He has published about 100 scientific articles, books, and manuals in different fields of biology and medicine.
Prof. Alibek manages cancer research projects and the development of new drugs to treat pathological diseases and new vaccines at Nazarbayev University. He is the chairman of National Medical Holding, and treats terminal cancer patients. He heads a working group to build a National Cancer Research Centre in Astana.