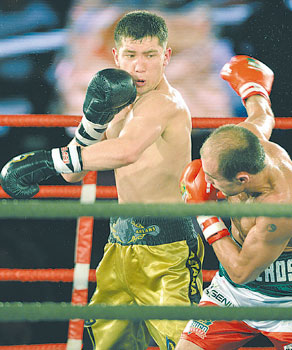 Astana Arlans boxers have fought their way into the finals where they will face Ukraine Otamans in May in Astana.

Middleweight (68-73kg) Sergiy Derevyanchenko led the team to the final in a victory over Irish Conrad Cummings. This third victory of the night ensured the Astana Arlans its spot in the WSB Team Finals, regardless of the outcome of the night’s two remaining bouts. Derevyanchenko won the fight 3:0 (50:45, 50:45, 50:45).

Next up at light heavyweight (80-85kg), Iran’s best boxer Ehsan Rouzbahani, who fights for the Kazakhstan team, left no hope for Mexico’s Guerreros Bojan Miskovic after a number of powerful combinations forced the referee to stop the contest before the end of the first round.

Astana Arlans team captain and Best Asian WSB Boxer of 2012, heavyweight (91+kg) Ruslan Myrsatayev was also too strong for Serbian Milutin Stankovic from the Mexico Guerreros team. Myrsatayev was declared the winner by a score of 3:0 (50:45, 50:45, 50:45).

All Kazakhstan fighters were in fine form during the competition and were backed by a fervent crowd as the fighters delivered a resounding victory.

Reaching their second WSB Team Finals in three seasons, the Arlans will face Ukraine on May 10 and 11in Astana.

Considered since the beginning of this WSB season as one of the favourites for the title, the Kazakh team has won eight of the ten bouts of this semi-final. Their team finals against the Ukraine Otamans promises to be an extraordinary spectacle.