By Maral Zhantaykyzy in Tourism on 10 April 2013 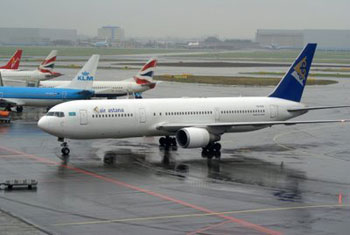 Kazakhstan’s major carrier develops new routes for the convenience of its passengers.

An Embraer 190 aircraft now flies the Astana-Kiev-Astana route on Mondays, Wednesdays and Saturdays. Flights from Almaty to Kiev and back are conducted on Tuesdays, Fridays and Sundays on an Airbus A320. With the launch of new flights to Kiev’s Borispol Airport, Air Astana’s international route network has expanded to 40 flights.

“The launch of flights to Ukraine, with its favourable geopolitical location in Eastern Europe, has great strategic importance for the development of the airline, especially in terms of the implementation of transit passenger capacity between Western Europe and the Asian region. In addition, a direct flight between the capital of Ukraine and Kazakhstan’s largest cities will strengthen bilateral political, trade and economic relations between the countries. I am sure that the capital of Kievan Rus’, abundant with beautiful sights, will strike the fancy of Kazakhstan’s tourists, who appreciate opportunities for convenient connections on the way to Europe. And the people of Ukraine will certainly be attracted to the young capital of Kazakhstan, Astana, as well as the business and cultural centre of country, Almaty,” President of Air Astana Peter Foster told a press conference on April 1.

“Thanks to the new flights to Kiev, we hope to increase transit volumes from Asia to Europe and back using Astana and Almaty as transit hubs. We have increased the number and quality of Ukraine connections not only with Kazakhstan but also with Asian destinations,” Foster added.

Before Air Astana’s expansion, daily flights from Ukraine to Astana and Almaty were flown only by Ukraine International Airlines (UIA). 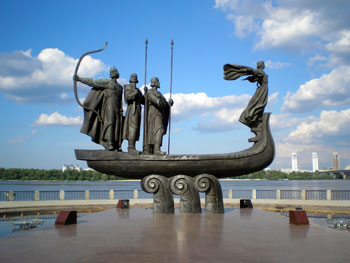 Members of the Nomad Club frequent flyer programme will be able to accumulate points with the flights and Nomad Club Silver or Nomad Club Gold members can take advantage of benefits for premium club members.

Now with the new route, flights to Europe are cheaper, particularly the Youth Fare segments. Travellers can stay in Kiev and admire the beauty and attractions of the city or visit friends in Ukraine, because Kazakhstan citizens can stay in Ukraine without a visa for 90 days a year.

According to Air Astana president, in the very near future Air Astana also plans to launch flights between Astana and Orenburg and open a route from Atyrau to Moscow. The company continues to implement its strategy of increasing passenger traffic. Last year, passenger traffic increased 12 percent.

Air Astana was named Best Airline Central Asia and India at the 2012 World Airline Awards held at the Farnborough Air Show in June 2012. In addition, Air Astana is the first carrier based in Russia, CIS and Eastern Europe to be awarded the prestigious 4-Star rating by Skytrax.