The following is an interview with Dr. Sohrab Ali Saffary, Ambassador Extraordinary and Plenipotentiary of the Islamic Republic of Afghanistan to the Republic of Kazakhstan

How do you see the bilateral relations between Afghanistan and Kazakhstan? 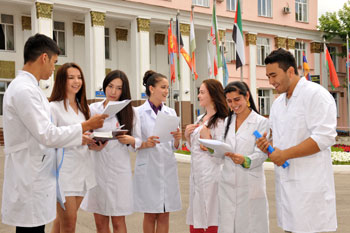 I think they are very good, but we need to improve, to develop them. Since the defeat of the Taliban, Kazakhstan is doing a lot for Afghanistan.

Firstly, President Nazarbayev and the Ministry of Foreign Affairs talk about Afghanistan at every conference and every summit trying to encourage other countries to help Afghanistan.

Secondly, Kazakhstan also helps us materially by sending, for example, wheat, flour, and dried milk powder. The Kazakhstan government helped build some of our roads, two clinics and a school in northern Afghanistan. And the most important help that Kazakhstan did at the initiative of President Nazarbayev is the 1,000 scholarship programme.

In five years, we now have 445 students in Almaty, Astana and Karaganda studying medicine, economics, engineering, agriculture, law, and in colleges. At the same time we have some students from the Afghan interior ministry for border problems. They are feeling very well. At the beginning they had some problems with the coldness, but now they are accustomed and telling that all the teachers and staff are very kind to us. This year about 150-200 more students will come again. Our first educated cohort to finish will be in 2015, I think. One year they study Russian or Kazakh and then 4 years or more than 4 years for the medical students, and the engineering students will finish in 2015 and will go to Afghanistan. When the students finish here and go there they will have the opportunity to have a good job and will serve Afghanistan. At the same time those people will be a bridge between Kazakhstan and Afghanistan. They will make the relations between our two countries much, much better as a hundred years ago when there was a good relation between Afghanistan and Central Asia.

It’s good for Afghanistan because for about 40 years Afghanistan has been at war, and civil war and then came the Taliban, which is a dark chapter in our history. There was no opportunity for young Afghanis to study. The girl schools were closed, educated women couldn’t work, they were sitting at home. So there is a gap for scholars, for educated people in Afghanistan of 40 years. Those who were educated 40 years before are still working. But orphaned were not schooled, or, if they were, the level of education was very low. Professors, teachers were out of Afghanistan or were killed by the Taliban. Now we have 10 million students and pupils in Afghanistan, 35% of them are girls, which is significant for us.

What are the priorities of the Kazakh-Afghan relations? How important are the economic ties and in which area?

Afghanistan is a country where until now we don’t have anything that is extracted out of the country, such as mining. So there are lots of opportunities especially for Kazakhstan. We appreciate that Kazakhstan is very honest with Afghanistan, and are waiting for investors to come into the mining sector. We have iron, we have oil and gas, we have gold, we have many things and we are waiting.

We need investors for roads, construction, and agriculture because in central Afghanistan we have the same climate as here. For 40 years the agriculture sector, like the others, was not developed. We need cooperation for hospitals, buildings, small city-towns and so on. When President Karzai was here and talked with President Nazarbayev he also asked to send investors, but the problem is that Kazakh investors cannot decide because of the security situation in Afghanistan. But about 3 months ago, I heard that one Kazakh company wants to make a joint venture with an Afghan company in Herat for exploring oil and gas and I’m very glad for that.

What are your expectations of the situation in Afghanistan post 2014?

I think, as President Karzai said many times, and also as our security institutions such as the ministry of defence, ministry of internal affairs, and the national security council indicated, that after 2014 the situation will be not bad, as it is today. But we cannot expect that in 2014 everything will be ok. There will be some problems, and it takes time to be better. We hope that our neighbours will be honest with us to try to bring the Taliban around the table to talk for peace, and it will be of benefit to our neighbours and also to Afghanistan. Otherwise our neighbours will also not be secure.

How important are international organizations in helping develop Afghanistan?

I can tell you generally, if I may. You know, 11 years ago Afghanistan was totally destroyed. Of what we had had before, nothing has remained. As I told you, no educated people, we have about one million disabled people. Two million, more or less, were killed. With the coming of NATO and the withdrawal of the Soviet Union we have a constitution, and an elected president, we have cabinet, a judiciary. So before, during the Taliban time, 3 countries recognized Afghanistan – Saudi Arabia, the Emirates and Pakistan. Just three. Now we have embassies in more 70 countries and everybody recognizes Afghanistan as an independent country. I think the situation will be better.

What I can say is that I wish all the best for Kazakhstan, the Kazakh people. I have been here before, one time with Ahmad Zia Massoud when he was first vice minister and one time by myself to Almaty as a minister. Because they were official visits it was very difficult to see anything, but now I have come as Ambassador and have gotten to know Astana. It is really very difficult to accept that in 15 years such a beautiful and modern city is built. I think it’s due to the hard work of President Nazarbayev and the whole cabinet and the people Kazakhstan who are willing to develop their country. I wish for a prosperous Kazakhstan with very clear future.