A Model for Curtailing Nuclear Proliferation

In February, Kazakhstan hosted a fresh round of talks between Iran and the group of six countries (China, France, Russia, the United Kingdom, the United States and Germany) on Iran’s nuclear program. The next round of high-level talks start Friday, again in Almaty, amid signs that progress is possibly being made on this complicated and dangerous issue. 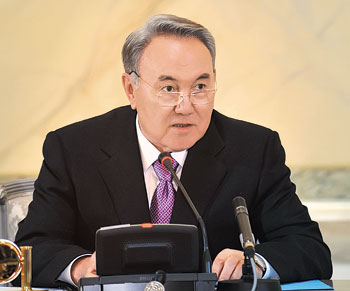 I offered Almaty as a venue for negotiations in the hope that the experience of our young country would be useful. Iran is our neighbor across the Caspian Sea. We respect the people of Iran and its great history and culture. We conduct continuous dialogue with Tehran on many aspects of regional security, including the nuclear issue, and we understand Iran’s concerns. We are convinced that a fair and long-term resolution to all issues related to Iran’s nuclear program is achievable only by peaceful and diplomatic means.

As the world’s largest uranium producer, we support the peaceful use of nuclear power. No other country can match our achievement of voluntary denuclearization after we inherited the world’s fourth-largest nuclear arsenal in 1991, when the USSR was dissolved.

More than 20 years ago, the people of Kazakhstan made a principled choice in favor of a non-nuclear-weapons world. That process began in Almaty in 1991 when I signed a decree to close the Semipalatinsk Nuclear Test Site. It put an end to 40 years of nuclear tests. The power of these explosions was equal to 2,500 atomic bombs dropped on Hiroshima. More than 1.5 million people suffered from those nuclear tests, and the radiation polluted an area roughly the size of today’s Germany.

As an independent state, our position was clear: Kazakhstan should become a state free of nuclear weapons. We, therefore, signed agreements for the withdrawal of those nuclear weapons and their means of delivery from our country.

In exchange, Kazakhstan gained the status of a non-nuclear-weapon state and international guarantees of security and territorial integrity from the leading nuclear powers — the United States, Russia, Britain, France and China. With the assistance of Russia and the United States, we eliminated the nuclear-weapons infrastructure on our territory.

In the following years, Kazakhstan became a leading participant in the global process of strengthening the non-proliferation regime. In 1994, I sanctioned the transfer of about 600 kilograms of highly enriched uranium, which would have been sufficient for the production of 20 atomic bombs, from Kazakhstan to the United States.

In 2005, with U.S. participation, we completed a project to blend down three tons of highly enriched uranium to a level of low enrichment for peaceful use.

Kazakhstan has also always supported the efforts of the world community on countering the threat of nuclear terrorism.

As part of our efforts to support the peaceful use of nuclear technology to generate energy, we have proposed hosting in Kazakhstan a low-enriched-uranium fuel bank under the auspices of the International Atomic Energy Agency. I have personally discussed this idea with Iran’s President Mahmoud Ahmadinejad.

At the same time, we regard as unjustified the argument of some countries that possession of nuclear weapons is an absolute guarantee for security.

Based on our experience of successful nation-building over the past two decades, we believe that real long-term guarantees of security result instead from sustainable social and economic national development along with peaceful and mutually-beneficial coexistence.

Kazakhstan supports the creation of a universal Global Nuclear Security System to combine effective observance of nuclear weapons non-proliferation with clear international norms for the peaceful and safe use of nuclear energy. We think that a solution to Iran’s nuclear program can be found in this context. Unfortunately, none of the existing bodies in the area of nuclear security and non-proliferation can resolve problems of this kind.

That is why I believe the international community should consider establishing a specialized independent nuclear arbitration body under International Atomic Energy Agency or United Nations auspices that would draw together the best global specialists in problems of nuclear security, energy and non-proliferation.

This new body could be given the authority to pass rulings on suspected violations of international agreements and rules in nuclear activities. These rulings would be the basis for introducing sanctions against states in violation of accepted international norms.

Much has changed in the world since Albert Einstein and other leading scientists pointed to the dangers of nuclear fission in 1946, and the world survived several decades of nuclear-armed superpower confrontation during the Cold War.

Nursultan Nazarbayev is the President of the Republic of Kazakhstan.
The article first appeared in The Washington Times on April 5.