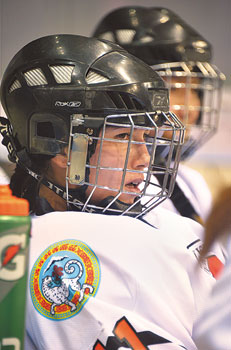 The 25-year-old Tukhtieva is a forward for Aisulu and a standout on the national team.

Tukhtieva talked with The Astana Times after Aisulu won a 7–2 victory over their rivals East Kazakhstan to win the Winter Games title.

How did you start playing ice hockey?

First I did short track speed skating. To tell the truth, I would not say that I was skating the whole year, we had no ice. We just had physical training such as running and working out. I went to the ice rink just once. I remember I was taken to the middle of the field, I stood there, got frozen, received a pair of ice skates and left. Six months later a friend asked me to join her ice hockey team.

How did you learn to play at the top level?

Everything depends on the coach. I wanted good coaches to pay attention to me and even show me how to do the most basic things like how to stand on skates. And I was lucky. Playing ice hockey, I had exactly the coaches I needed at every stage of my development.

Were you a fast learner?

Yes, I rose quickly through the ranks. Within a couple of years of starting I made the junior national team, I mastered skates and stick quickly. The most difficult thing was to stop, at first I kept running into the boards all the time.

Who was your most important coach?

What are your main achievements in your decade of playing on the national team?

It is hard to recount them all. I do not remember exactly how many times, I think, seven or eight times, I played in the World Championships and in European club tournaments. I played twice in the Asian Games in the Chinese city of Changchun and in Almaty where our team won the gold medal. Recently, I have played in the Olympic qualifying tournament, and in the championships of Kazakhstan.

Fans remember your performances in the 7th Asian Winter Games. Experts rated you as the most technical proficient and the fastest player on the Kazakhstan team and that you scored its most important goals.

I don’t agree with that: Did other girls look weaker? Not at all! We are a team, ice hockey is not an individual sport. I was not the only one to score, our goalkeepers didn’t let anything through and our defenders neutralized the forwards of the other sides. We won as a team.

Have you ever regretted that you chose such a dangerous sport?

Never in my life! I love the game – its speed, its teamwork and its variations in play. I wouldn’t trade it for anything.

What is the secret of your high technical skills?

In training, we all work the same way, we get a comparable work load for each player. The only thing is that every athlete focuses on some specific elements. I pay most attention to my hands: working with the stick and with keeping control of the puck.

Do you have another career outside sport?

Yes, I am a second year student at Kainar University in the department of accounting and auditing.

You were not a part of the team before the last Winter Olympics in Vancouver. Was that because of professional or family obligations?

Yes and now I have a four-year-old son. I will try to prevent him from becoming a professional ice hockey player but I will let him play as an amateur.

Almaty has just won the Winter Games tournament confirming it as the champion team in the country. Do you feel your team has no real rivals in the country?

Why do you think so? The girls from Ust-Kamenogorsk become better with every year. I will tell you honestly, in the recent game, I was exhausted because I skated too much, and this is an indicator that the rivals were worthy. They were a real challenge. We win because we always come to our training sessions focused. That’s why in every match we are strong. Our philosophy is, if you come to play – play to the fullest.