By Natalya Kurpyakova in Culture on 13 March 2013

ASTANA – Kazakh National University of Arts students in the visual arts, musicology and choreography recently discussed impressionism at a student conference held on the premises of the Kulanshi Art Center. 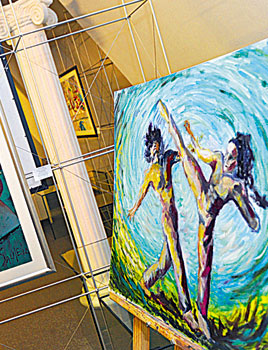 One of the art pieces presented at the “Impressionism in arts and music” conference demonstrates young spirit.

The discussions centered around a project called “Impressionism in arts and music,” which is dedicated to the 20th anniversary of the establishment of diplomatic relations between the European Union and Kazakhstan and marks the 15th anniversary of the Kazakh National University of Arts (KazNUA), said the head of the Kulanshi Art Center and professor of the KazNUA Leyla Makhat.

“I am confident that interactive forms of education are the best,” Makhat told the conference. “The history of arts and pictorial art are not only the theoretical subjects. Artists have to obtain different techniques, but they must first understand the reasons behind changes in styles of painting and what their artistic predecessors thought and felt. The ultimate goal of the conference is for the youth to become creators themselves.”

Participants of the conference prepared performances, including the music of Erik Satie, Claude Debussy and Maurice Ravel. The type of impressionism they introduced in the music has had the same effect as those who laid the basis for impressionism in art in the last third of the 19th century.

A month prior to the conference, young artists were assigned the task of creating their own impressionist paintings to be displayed in a mini-exhibition “European Wind in the Kazakh Steppe.”

Their work sought fresh perspectives on nature, cityscapes, movies, scenes from life. A separate genre was portrait, which allows experimentation with mood, lighting and contrasting strokes. The young artists did serious work and eagerly defended their creations. For some artists, such as Leyla Makhat who prefers realism, it is difficult to use open colors and large strokes.

“I like the feeling of freedom in Impressionism, the ability to dream. It teaches us to watch,” said Julia Pulatova, “I had a period when I was looking for ideas from someone. But then there is no development, you start to get stuck. You have to move and look for yourself.”

The project was pleasant, useful, and fun. Participants of the conference discussed their own style, the place of the artist in society, recognition and oblivion. “I want to be known as Van Gogh, but not to live the way he did!” claimed young pragmatists.

In conclusion, young artists produced works in the best traditions of modernism. It will not destroy the canons or overthrow authority. It will be a path to discipline. Talent deserves to be noticed, seen and heard. Understanding can come later.