ASTANA – In the midst of the Fourth FIDE Women’s World Team Championship held in Astana, The Astana Times met International Grandmaster Konstantin Landa, who, along with coach Pavel Kotsur, did his best to prepare Kazakhstan women’s national team for the competition. 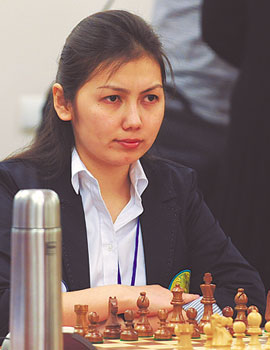 Is it hard to work with a women’s team?

Actually, this is my first experience but we worked with the team prior to the Chess Olympiad in Istanbul and demonstrated good results.

In fact, working with the women’s team is not much different from training the men’s team, except for the fact that girls need to be more prepared psychologically, while men are satisfied with clear and logical explanation.

What can you say about the prospects for our players at this championship?

They are young but promising. All of them – Guliskhan Nakhbayeva, Dinara Saduakasova, Madina Davletbayeva, Gulmira Dauletova and Zhansaya Abdumalik – are very capable players. I think in the nearest future, the Kazakhstan team will be one of the strongest national teams of the world, noting that they will continue to work on the plan that we have developed for them, enhance training, and participate in major competitions.

As for the current tournament, according to the capabilities of the clubs participating in it, they could be divided into three groups. 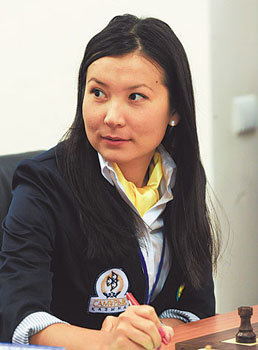 A number of teams, including Russia, China, Georgia, India, and possibly Ukraine, will actually fight for the first place [Ukraine did win the tournament on March 12. Kazakhstan finished in the 7th place]. They are objectively stronger than other participants and they have higher rating and class. Our team might be ranked in this on the 6th – 9th place. I would rank the Turkey team, which was included at the last moment by the order of FIDE president Kirsan Ilyumzhinov, as in the tenth place.

Will you reveal a few of coaching secrets? For example, in other sports they study the performances of potential rivals using the video. Is there something like that in chess?

Certainly. There is an electronic database for each opponent. We study his (her) strengths and weaknesses, and apply this knowledge in games. We also form the database of our own players.

Is it true that our team is called a “dark horse”?

Yes, we have all the signs of a “dark horse”. Much depends on the attitude of our players. They can jump off to a good start and excel. But our girls do not have, so far, such “hardening”, like their rivals, and we should not expect a miracle from them. I am sure the Astana championship will give them great experience that will allow them to achieve new victories!