By Maral Zhantaykyzy in National Overview on 13 March 2013

ASTANA – On March 6, the University of the Arts held its 15th anniversary concert in the Central Concert Hall. 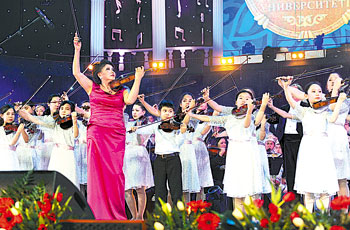 Aiman Mussakhodjayeva and the Aigolek Children’s Ensemble opened the evening dedicated to the 15th anniversary of KazNUA.

The dean of the university, internationally acclaimed violinist Aiman Mussakhodjayeva and the Aigolek Children’s Ensemble opened the programme playing the Praeludium and Allegro in the style of Pugnani by Fritz Kreisler.

The concert also included contemporary works and those attributed to the beloved, legendary composer and musician Korkyt-Ata who lived 1,200 years ago and who created the kyl-kobuz stringed instrument.

The Samghau (Floating) and Eligay (Fawn) children’s choirs that have won international competitions, sang in a cappella President Nursultan Nazarbayev’s song “Ushkonyr” accompanied by stills from the film “The Sky of My Childhood.” Young musicians performed pieces from around the world on dombras and the Polovtsian Dances from Borodin’s “Prince Igor.” 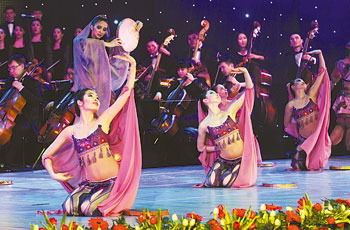 The Kazakh National Academy of Music (KazNAM) was created on March 31, 1998 with the support of President Nazarbayev. On Oct. 12, 2009, the government upgraded its status and renamed it the Kazakh National University of Arts (KazNUA). In 2010, the university moved into the Shabyt Palace of the Arts.

The university prepares its graduates for positions not only in Kazakhstan but also around the world. It has one teacher for every five students.

“The main goal of our university is to develop a classical tradition of the highest global standard and a tradition of Kazakh musical culture. Our students are close to the melody of Korkyt’s kobyz and to the sounds of Stradivarius’ violin,” Dean Mussakhodjayeva said.

The university’s anniversary celebrations will also include the International Forum of Art in Astana which will be attended by Princess Caroline of Monaco, Count Sheremetev, Azerbaijani actor, singer and diplomat Polad Bulbuloglu, Russian cultural ambassador Mikhail Shvydkoi and other well-known artists and the presidents of more than 20 higher education institutions of culture and arts from around the world.

The celebrations will also include the premiere of the movie “The Sword of Victory,” the meeting of the Council of Rectors for the support of the Interstate Fund for Humanitarian Cooperation (IFESCCO), concerts by the Symphony Orchestra and the Baisseitova National Opera and Ballet Theatre, classical piano works, Kazakh folk music and vocal, choral, and violin concerts. Master cellists Kirill Rodin from Russia and Kazakhstan’s Ravil Kulmametov will perform and violinist Maxim Fedotov will give a solo concert.