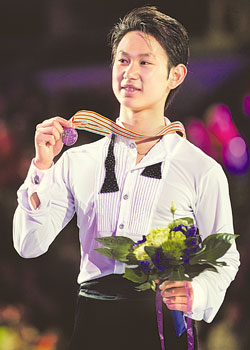 Silver medal of Denis Ten proves the power of belief.

On his Facebook account, Ten thanked his fans for their support. “Thank you so much for your support. I am so proud to attain a new achievement for the figure skating history of Kazakhstan! It was my dream, my goal and without you – it wouldn’t come true,” the statement says.

Three-time world champion Patrick Chan of Canada edged Ten out for the first place medal. In the short programme, Chan scored a record 98.37 points. However, in the long programme, the judges gave high marks to Ten. When the two exercises were summed up, the skater from Kazakhstan had garnered 266.48 points and missed gold by only 1.3 points. Spanish skater Javier Fernades took bronze.

“I am proud of how I performed at this World Cup,” Ten said. “I did not expect to finish this season well. Of course, the second place in the short programme was the biggest surprise for me. And I couldn’t do correctly the long programme during the whole season.”

This season has been difficult for Ten because of injuries to his legs. He wasn’t able to perform well in figure skating’s Grand Prix or the Four Continents Championships.

“The beginning of the season was rough. I struggled with injuries and equipment problems. Took off a month in December but when I got back on the ice, right after the first competition in 2013—I injured myself again. The whole season seemed to be a nightmare! It was truly a tough time… but I never lost faith and didn’t give up. I believed in myself and always knew that my family and coaches are always there for me, their support was just incredible!” reads the statement on his Facebook page.

Nevertheless, Ten came fully prepared to the World Cup. His short and free programmes constituted a single coherent composition that is admired by experts and deserves high marks. And the Kazakhstan figure skater coped perfectly with difficult technical elements. After the short programme, Ten was ranked second and was able to hold that position after the free skating programme.

“We did a huge amount of work before the World Championships. I completely changed my daily plan, schedule, training system, diet and practically my life. My on-ice trainings became longer and more intense,” he said.

Kazakhstan’s figure skating coach, Kenesh Sarsekenova, commented the victory, saying “Everybody is happy for Denis Ten’s victory. It is the first such result in figure skating in the history of independent Kazakhstan.”

After the victory, Ten’s ranking in the International Skating Union rose from 16th to the sixth place. On social networks, he admitted that he did not expected such a result from himself and hopes to repeat the success at the Sochi Olympics in 2014. At the end of his post, Ten advises his fans. “Always believe in yourself! Remember that you can always go beyond expectations.”