The participation of Kazakhstan’s delegation in two major conferences on the humanitarian impact of the use of nuclear weapons in Oslo in early March offered a unique opportunity to remind the world that the pain of the Semipalatinsk tragedy lingers even today, 20 years after the closure of the Semipalatinsk nuclear test site by President Nursultan Nazarbayev. And it also has given an idea of the great number of countries, organisations and individuals concerned with nuclear disarmament issues which will hopefully soon reach a critical mass and trigger a chain reaction of global nuclear disarmament. 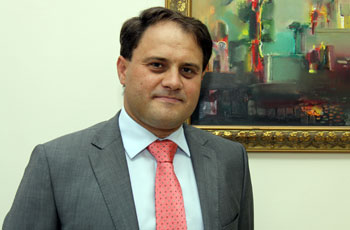 On March 2-3, a delegation including Honorary Ambassador of the ATOM Project Karipbek Kuyukov participated in the International Civil Society Forum in Oslo organised by the non-governmental organisation ICAN (International Campaign for the Abolition of Nuclear Weapons). This event brought together more than 400 participants from nongovernmental organisations from more than 100 countries.

On March 4-5, a delegation led by Chairman of the Commission on Non-Proliferation of Weapons of Mass Destruction under the President of Kazakhstan and Director of the Nazarbayev Center Kanat Saudabayev took part in the international conference “Humanitarian Impact of Nuclear Weapons” organised by the Government of Norway. More than 500 representatives of the world’s governmental and international organisations, research fellows and experts in the field of disarmament, non-proliferation and provision of humanitarian assistance to nuclear weapons victims participated in the event.

What made these events memorable?

Firstly, they were marked with an atmosphere of burning desire to stir up international public opinion and to urge world leaders to find an alternative to nuclear weapons as an absolute guarantee of security and to abolish them. Dozens of governments and dozens, if not hundreds, of NGOs and think tanks around the world are engaged in this problem. I want to believe that their efforts will bring results both in terms of helping victims of nuclear tests and in moving the process of nuclear disarmament forward at a global level.

The ATOM Project, which the Nazarbayev Center presented at this platform, is one of thousands of voices around the world calling for help for victims of nuclear tests and for more concrete steps towards nuclear disarmament around the world. Large-scale involvement in the anti-nuclear movement and the participation of different countries and different organisations is its strength. The power of the ATOM Project, initiated by President Nursultan Nazarbayev on August 29, 2012, is that it provides a medium for the voices of people for whom the consequences of nuclear tests are an everyday reality.

Secondly, the events in Oslo were marked with the confidence in the rightness and the ultimate success of the idea of a world free of nuclear weapons, a notion that seems utopian, and therefore pointless, for many. Among the arguments cited by politicians, experts and activists from around the world in favour of the attainability of this goal, I would highlight the following:

1) Mankind has found the courage to abandon two other weapons of mass destruction—biological and chemical weapons—by signing relevant U.N. conventions, so why wouldn’t it give up the most destructive weapons in the world? Although it should be noted that the Convention on the Prohibition of Bacteriological Weapons and the Convention on the Prohibition of Chemical Weapons, which are in force now, were signed not by all countries. Syria’s chemical weapons are a current topic of discussion, for example, and reserves of chemical weapons in the world are being destroyed more slowly than the document required.

2) A number of countries, including South Africa, Ukraine, Belarus, and, of course, Kazakhstan, have had the courage to abandon their nuclear weapons programmes and/or nuclear arsenals, and their experience can be an example to be emulated by others.

3) There is growing awareness in the world that the use of even one of the 19,000 nuclear weapons in a “limited regional war” would lead to disastrous consequences not only for the region but for the entire world by undermining the global economy and the environment.

Of course, one can argue with these positions. One could say that humanity is, in fact, moving in the opposite direction, toward expansion rather than reduction in the nuclear club, as evidenced by recent tests in North Korea, for example. However, according to representatives of governments and civil society organisations from 132 countries in Oslo this month, this only makes the efforts of committed supporters of nuclear disarmament more important and relevant. (By the way, the five recognised nuclear powers were not present at a conference at the official level, which was noted with great regret by dozens of speakers and speaks to the challenges of the dialogue in the field of disarmament.)

Certainly one of the most consistent and strongest supporters of this process is the president of Kazakhstan, who for more than 20 years has demonstrated his conviction not only with words, but with concrete actions.

“Despite the fierce resistance of the Soviet leadership and their military-industrial complex, President Nursultan Nazarbayev of Kazakhstan, even before our country became an independent state, issued a decree, on August 29, 1991, closing the Semipalatinsk nuclear test site, the world’s largest,” Kanat Saudabayev said in his remarks to the conference.

“This historical fact, expressing the will of the people of Kazakhstan, is of great importance to world civilisation. After the closure of the Semipalatinsk test site, thanks to the example of Kazakhstan and the actions of the world community, other test sites in the world—in Nevada, Lop Nor and Novaya Zemlya—stopped their activities. The ‘nuclear club’ powers signed on to documents prohibiting nuclear tests and committed themselves to adhering to a moratorium on further testing.”

I was also deeply impressed by the active life philosophy of celebrity supporters, Martin Sheen in particular, who played the president of the United States in the TV series “The West Wing” and has been an anti-nuclear activist for many years.

I was glad to know that celebrities in Kazakhstan will be actively involved in this process too. We have already had good conversations on these topics and supporting the ATOM Project with such prominent people in Kazakhstan as Ilya Ilyin and Serik Sapiyev, Aruzhan Sain and Farkhad Abdraimov, among others. I want to believe that together we will contribute in achieving progress in this complex issue.

I would also especially like to note the active role of the government of Norway. This state for many years has played the most active role in bringing the world towards the goal of liberation from nuclear weapons, sparing neither money nor effort. In this case, Norway and Kazakhstan are like-minded partners and allies.

Finally, I want to say a few words about Karipbek Kuyukov, a great man. Through his courage and faith in life, he has shown that spirit is greater than substance. He is a talented artist, a leader of public opinion, a lifelong activist for nuclear disarmament and Honorary Ambassador of the ATOM Project.

It is impossible to listen impassively while he tells the story of his life and calls for urgent action in order to build a world without nuclear weapons. His story inspires first tears, then hope and finally action. Judge for yourself:

“We, as survivors and witnesses of horrific madness, strive to warn the world before it is too late about the consequences of nuclear weapons,” Kuyukov said. “If billions of people around the world would realise the consequences of nuclear weapons testing, global public opinion united as one would have enough power to eliminate atomic bombs forever. My appeal for a nuclear-weapons free world is expressed in my paintings. I put part of my soul and part of my heart into them…The nuclear arms race, the desire to conquer the world with nuclear weapons is growing. We need to stop it.”

I sincerely bow to Karipbek Kuyukov and people like him. Thanks to these people, I can believe that humankind will think more deeply and the goal of a world without nuclear weapons, which seems utopian for many, will become achievable.

…For some reason, I recall a concise English expression “striving for a better world” which, with hefty dose of irony, was translated by some journalists as “aspiring to a better world,” implying a certain vagueness of effort toward ephemeral goals.

This expression, though it does not perfectly fit the situation, came to my mind in Oslo. Why doesn’t it fit perfectly? Because I believe that the striving for a better, nuclear weapons free world demonstrated by the participants of the conferences is very concrete, tangible and directed towards the most important goal of the modern age—the prevention of a nuclear catastrophe on our planet.

The author is Deputy Director of the Nazarbayev Center.