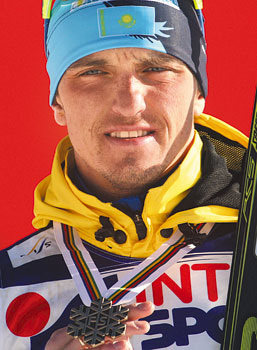 ASTANA – Kazakhstan’s best skier Alexey Poltoranin is having a remarkable season with victories in the World Cup, International Ski Federation (FIS) competitions, and winning two bronze medals at the World Championships in Italy.

In an online interview, Vladimir Smirnov, Kazakhstan’s 1994 Olympic champion in the 50 km ski race, paid tribute to the achievements of his successor.

How do you assess the performances of medalist Alexey Poltoranin and of Nikolay Chebotko at the FIS World Cup in Val di Fiemme?

I watched the first part of the championship on TV but I saw the final race firsthand at the stadium. The whole stadium erupted in cheers for the leaders of the marathon: Johan Olsson from Sweden, Dario Cologna from Switzerland and Alexey Poltoranin from Kazakhstan. The race was very exciting and challenging. It was a real success for Kazakhstan. I saw how happy the fans were. Everyone knew that Poltoranin was a great sprinter but his capacity for endurance in the race had only been recognized in advance by a few. So it surprised and impressed many people.

When you retired, every journalist in Kazakhstan asked you to identify your successor but it was clear that in those days you felt there were no real candidates to fill your role. Do you believe that successor has finally appeared?

I have already noticed a long time ago an excellent skier in Kazakhstan called Alexey Poltoranin, but time is needed for any athlete to reveal their full potential in the world of international sport. Now the time has come for Poltoranin: I can truly say, he is Kazakhstan’s hope in international skiing for the next five years. It is very significant that his talent has emerged on the eve of the Olympic Winter Games in Sochi in 2014.

In the Soviet years, Kazakhstan’s best international skiers were Ivan Garanin and Vladimir Sakhnov. But we have never had such a universal racer as Alexey Poltoranin. In the current season, he won victories in several World Cup stages in the individual and team sprints, and in the 15 kilometre in classical style. Is it possible to compete in every kind of race today? 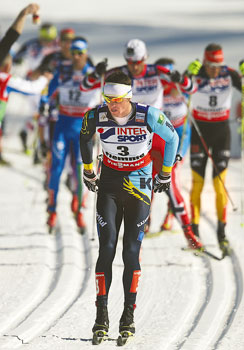 I can tell you that there are no desperate attempts in this sport. Everything has its own natural character and if the athlete prepares and trains smartly, then success will surely come. I think that in the current winter season Alexey (Poltoranin) showed his abilities both over speed, and over endurance. He also found more time to prepare his skis.

Eastern Kazakhstan was always rich with ski talents. Nevertheless, earlier the centres of preparation for skiers were Rudniy, Balkashino, Shchuchinsk, all in the north of the country. Has the time come to look for competitors from those areas for the Sochi Olympics?

Yes, Eastern Kazakhstan has always had excellent traditions in ski sports. It is natural due to the weather conditions of the region. But we should also pay more attention in the future to skiing talent from the north as well and to invest money for the development of the local sports infrastructure there. The return on those efforts will certainly come.

What are Poltoranin’s special strengths as an athlete?

Alexey is comprehensively developed already. Therefore, he only needs to learn to reap the fruits of his big victories today and to plan correctly his priorities for a season.

After he won bronze at the World Cup in Italy Poltoranin told a press conference that he hopes to win two medals in Sochi and would like to win gold. In Vancouver, in 2010, he was only one place away from a medal in the individual sprint. Can he take that step in the 2014 Olympics?

Alexey has great chances to do well in Sochi. But I repeat, he must establish the priority of achieving his goals there over his current races. In my opinion, he should focus on the sprint contests and on the 50 kilometre race.