OSLO – During a recent visit to Norway, Chairman of the Commission for the Non-proliferation of Weapons of Mass Destruction under the President, Director of the Nazarbayev Center Kanat Saudabayev held a series of bilateral meetings with Norwegian and international policy makers and experts in nuclear non-proliferation and disarmament. 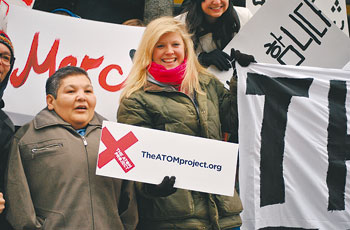 The parties talked over the current state of and prospects for cooperation between Kazakhstan and Norway and international organizations, particularly in the key area of non-proliferation and reduction of the nuclear threat.

“I feel deep respect for Kazakhstan for its consistent contribution to nuclear disarmament,” Nybakk said. Nybakk, who also serves as a PNND co-president, believes it is necessary to cultivate contacts and expand cooperation between Norway and Kazakhstan in this sphere and in the international format as well. 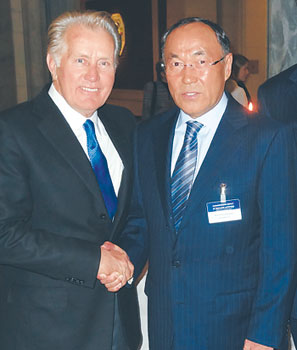 During their conversation, Kanat Saudabayev and Martin Sheen emphasized the importance of further expansion of the global efforts aimed at reducing nuclear weapons in the world.

Director of the Nazarbayev Center invited Martin Sheen to visit Kazakhstan and personally familiarize with our country’s experience in nuclear disarmament. Martin Sheen, known, among other things, as “U.S. President Jed Bartlet” from “The West Wing” series noted the importance of Kazakhstan’s contribution to the reduction of the nuclear threat and expressed his intention to strengthen and develop cooperation in this field.

Later on the same day, Kazakhstan’s delegation met Director of the Norwegian Institute of International Affairs (NUPI), Ulf Sverdrup, co-president of PNND, Member of the Scottish Parliament Bill Kidd and others.

In a conversation with Ulf Sverdrup, referring to the similarity of objectives and priorities of the two institutions, such as conducting research on international political and economic issues, the parties noted the great potential for cooperation in this field.

In his turn, Bill Kidd, who has visited Kazakhstan before, highlighted the importance of the example the republic has shown in nuclear disarmament for the global efforts aimed at reducing the nuclear weapons and the need to more widely promote the practical disarmament experience of our country to the international community.

After viewing the works of Honorary Ambassador of the ATOM Project Karipbek Kuyukov, Bill Kidd stressed that “his paintings, such as the “First explosion”, clearly expresses the thought: nuclear weapons are horrible and the mankind must find the strength to get rid of them.”