ASTANA – The Samruk Kazyna National Sovereign Fund is embarking on a massive programme of railway and port construction this year, its chairman Umirzak Shukeyev told an expanded meeting of directors in February 2013.

“Last year we worked successfully to fulfill the tasks set by the president and the government,” Shukeyev said. “Over the past year we have solved a number of systemic issues. The Fund Act and the 2022 Development Strategy were approved. New dividend, innovation, industrial and investment policies were developed.”

Shukeyev said the increase in income was achieved despite lower prices and reduced exports of uranium on the world market. Global oil prices remained at their 2011 levels and the country’s oil production was cut. The fund also incurred additional costs in setting up two new development companies following the unrests in Zhanaozen in December 2011.

“The operating fund return (EBITDA) increased from 17.8 percent in 2011 to 18.0 percent in 2012,” Shukeyev said. “The fund’s consolidated net assets (equity), excluding the second-tier banks, are estimated to reach 6.1 trillion tenge ($40 million) for the year, an 8 percent increase on 2011. The fund’s plans were over-fulfilled by all its major subsidiaries. Oil and gas condensate production reached 21.4 million tons. Tariff and passenger turnover increased by 5 percent and 14 percent respectively compared to 2011. Uranium output increased by 10 percent on 2011 and electricity production totaled 14.5 billion kW/h. This was 8 percent higher than in 2011,” he said.

In 2012, the fund’s Corporate Governance Rating increased from 53 to 62 percent compared to 2010. The leader among the fund’s companies in corporate governance rating was the Kazatomprom National Atomic Company at 70 percent.

In early 2012, the most serious risks and challenges the fund faced were the situation with the BTA bank and issues of financial stability. Shukeyev said BTA’s debt had been successfully restructured, improving its prospects. The bank’s capital was reinstated from $ -8.2 billion to $ +1.5 billion, its foreign debt was reduced from $9.1 billion to $750 million, and the maturity of the loan was prolonged until 2022. BTA’s funding costs were reduced on average from 10 percent to 5.5 percent and its liquidity options were improved. The fund’s share in BTA’s capital increased from 81.5 to 97.3 percent.

Samruk Kazyna is also restructuring its assets, Shukeyev said. “The work to improve the long-term value of the subsidiaries will continue through the improvement of their corporate governance, productivity, profitability, cost-effectiveness and sustainability,” he said.

The fund plans to ensure the supplies of all basic needs in industrial products through regular procurement by its companies. “All the companies of the fund will have to ensure the growth of local content in line with their strategies,” the chairman said.

Shukeyev said the fund was drafting new procurement rules using a new selection system to improve the quality and competitiveness of its goods and services.

Within the framework of the 2013-22 programme to upgrade existing businesses and establish new ones, the fund plans to decentralize production facilities and move to more long-term contracts with its subsidiaries.

In 2013 and 2014, the fund plans to sale shares in 26 assets and 311 non-core facilities of KazMunayGas and Kazatomprom. Shares in social facilities will be first offered to local agencies, and then will be sold on the free market.

President Nursultan Nazarbayev also instructed Samruk Kazyna to implement the People’s IPO Programme of share issues in 2012. KazTransOil (KTO) was the first company to sell its share offerings on the stock market in the fall of 2012. The demand for its shares was oversubscribed by 213 percent. KTO raised 59.4 billion tenge ($390 million). A total of 34,676 applications were received from individuals who comprised 79.3 percent of the total public offering. They bought 22.1 billion tenge ($150 million) of shares.

In 2012, as part of the 2010-14 State Programme for Accelerated Industrial-Innovative Development (PAIID), seven investment projects totaling $2.3 billion were carried out by the fund, including the construction of two major rail lines from Zhetygen to Khorgas and from Uzen to the border with Turkmenistan. They have an annual traffic capacity of up to 10 million tons and 7 million tons respectively.

On December 4, the fund opened a factory making electric locomotives in Astana’s Special Economic Zone. On December 25, another factory to make silicon-based photovoltaic modules opened in Astana. A new ecological centre to deal with oil spills in the north of the Caspian Sea was opened.

Shukeyev said that the fund has already begun to implement President Nazarbayev’s directions for its work this year. 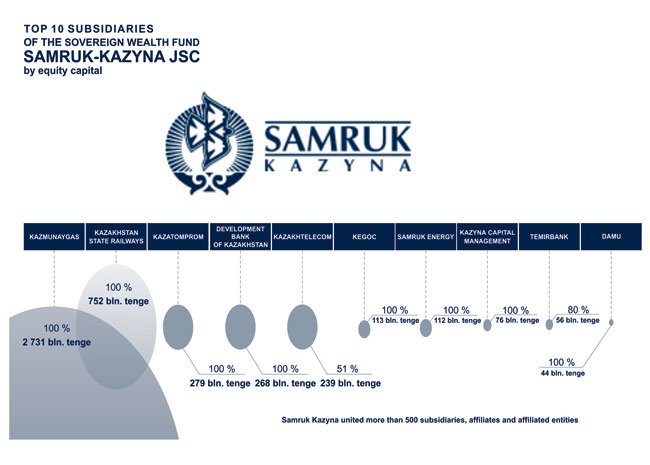 “The first goal is to attract highly qualified foreign specialists to work in the fund’s companies,” he said “We have analyzed the companies’ needs and are working out the conditions for recruiting foreign specialists and getting them to train our local personnel. We plan to attract high-level foreign executives to work with us on business development, logistics, airport management, new fields in chemistry, mid-level managers for power and communications as well as in market development. We also need to recruit professionals in the fields of sustainable development, human resource management, financial control and reporting, and risk management.”

The fund also plans to build the Astana – Almaty high-speed rail link and is carrying out a feasibility study on it which will be completed by the end of June.

The Aktau International Sea Commercial Port will transfer its investment in expanding the port to KTZ by the end of March to accelerate the second and third stages of the project.

The fund will finance a new Tobol-Kokshetau-Astana gas pipeline. Work on it will start this year.

In order to strengthen energy security, President Nazarbayev instructed the fund to “complete the circle” of national power supply systems for the centre and west of the country. The fund is producing a projection for the power generation and electricity consumption needs of the Mangistau and Atyrau regions. It is drafting the terms of accession of Western Kazakhstan to the Common Power Grid. Work to construct a 500 kW North-East-South power connector will start in the second half of this year.

The fund is drawing up a proposal for the location and design of the country’s first nuclear power plant and will present it to the government by May 1.

The fund is also drafting a new 2012-15 Comprehensive Energy Efficiency Plan to reduce energy consumption by its companies. It is producing a new master plan to use alternative energy.

Samruk Kazyna is also focusing on preparing for EXPO 2017. It will provide full energy supplies through alternative energy sources used at power plants.

The fund is also working on diversifying the national economy.

“The revenues of Samruk Kazyna’s companies (along with those it jointly controls) contribute 23 percent of the country’s GDP,” Shukeyev said. “The companies must become the locomotives of diversification and industrial and innovative development of the country. The fund’s total investment programme includes 157 projects worth $101 billion, of which 74 projects worth $54 billion are currently being implemented.”

In 2013, as part of the Programme for Accelerated Industrial and Innovative Development Programme (PAIID), four investment projects worth $1.7 billion will be implemented by the fund. They are: the reconstruction of a sulfuric acid plant with a capacity of 180,000 tons per year; the construction of three substations to provide power to homes in Almaty and the surrounding region; a factory to make road bitumen at the Aktau Plastics Plant with a capacity of 406.5 tons per year; an oil refinery to make 255,400 tons of petrol and diesel fuel and 330,300 tons of vacuum gas oil per year; and the rebuilding and modernisation of the Atyrau oil refinery to make the basic petrochemical products of benzene, paraxylene and high-octane gasoline meeting Euro-3 standards.