Residents of Astana, Other Cities and Towns Celebrate Maslenitsa

ASTANA – Maslenitsa (or Butter Week in Russian) is the most cheerful and brightest among Orthodox Christian holidays, symbolizing the end of winter and the expectation of the awakening of nature in springtime. Usually celebrated during the last week before the Great Easter Lent, this year Maslenitsa falls on March 11-17. 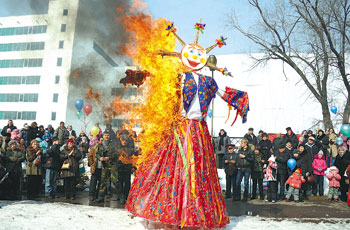 Burning of the stuffed figure of winter is the most interesting event of Maslenitsa that completes the Butter Week.

This holiday is considered to come from pre-Christian times, when the Slavic tribes in Eurasia were still pagans.

The most characteristic food of Maslenitsa is bliny (Russian for pancakes). Round and golden, they are made from the rich foods still allowed by the Orthodox tradition: butter, eggs and milk. According to an old belief, the more pancakes one eats during Butter Week, the more successful and the more satisfactory the year will be.

During the week of Maslenitsa, meat is forbidden. The old word for Maslenitsa, ‘Myasopust’, means “empty of meat.” The Russian Orthodox Church, however, prefers calling it a ‘Cheese Week,’ because the meatless diet still allows cheese, butter and cream, which then are forbidden during the seven weeks of Lent.

The Russian Centre of Science and Culture in Astana holds celebrations to mark this holiday. The Embassy of Russia in Kazakhstan and the International Union of Cossacks “Ataman” have supported the event.

According to Chairman of the Astana City Branch of the Republican Slavic Movement “Lad” Alexander Zaripov, the centre celebrates Maslenitsa each year. This year, guests from ethnic and cultural organizations such as the Belarusian and the Ukrainian cultural centres, the Russian community in Kazakhstan, as well as ambassadors and representatives from diplomatic missions in Kazakhstan, have been invited.

The Organizing Committee of the Russian compatriots of Astana (“Union of Cossacks of Steppes,” a branch of “Union of Russian, Slavic and Cossack associations” in Astana, “Russian Cultural Centre” of Astana, the branch of “Russian compatriots”) with the support of the Akimat of Astana, the Russian Embassy, and Art pro LTD jointly hold festivities under the Great Maslenitsa programme.

A festival is held at a scenic area near the Zhastar Palace. It includes a meeting with the heroes of Russian fairy tales along with sport games and street trade with vendors selling sweet tea and pastries. The winners of contests and competitions receive prizes and refreshments, along with the main symbol of Maslenitsa – pancakes (bliny). The festive concert programme includes arts groups of ethno-cultural centres of Astana such as Cossack Choir “Stanichniki”, an ensemble of the Polish Centre, and others.

Every day of the Maslenitsa week is devoted to special rituals.

On Monday, Maslenitsa is welcomed. On that day, people make the straw-stuffed figure of winter, dress it in old women’s clothing and, singing, carry it on a sleigh around the village. Then the figure is put onto a snow-covered slope that people used for tobogganing, which is considered not just fun, but the ancient rite, because it was thought that the one who came down the hill more than once was likely to have tall flax in summer.

Tuesday is called “zaigrysh” (an old Russian for game day). From that day, the entire village starts all sorts of activities: sleigh riding, folk festivals, skomorokh (Russian for travelling fun actors) and puppet shows. The streets are getting full of people in carnival costumes and masks who visit homes of their neighbours and organize impromptu concerts. Large companies ride troikas and simple sleighs.

Wednesday – a day of gourmand – opens feasts in houses with bliny and other dishes. Each household has tables with delicious food, baked pancakes, and brewed beer. Tents selling all kinds of food appear everywhere.

On Thursday – revelry – comes the climax of games and fun. It was then that the hottest fistfights usually took place in the past.

If on Wednesdays sons-in-law were treated with pancakes in the homes of their mothers-in-law, on Friday it was their turn to arrange dinners with bliny. A day before, mothers-in-law had to send to the homes of their sons-in-law everything necessary for making bliny: pans, ladles etc., and fathers-in-law had to send a bag of buckwheat and some butter. The disrespect of the tradition from the part of a son-in-law was considered dishonour and insult; and it could even be a reason for life-long enmity.

Saturday is devoted to the visits of relatives paid to young wives.

Sunday is named “forgiveness”. On that day, people used to ask each other for forgiveness for all grievances and troubles; in the evening people used to go to cemeteries and “bid farewell” to the dead.

On the last day of Maslenitsa comes the most interesting event – saying goodbye to Maslenitsa – a burning of the stuffed figure of winter. People throw the remnants of pancakes and food into the huge bonfire explaining to their children that all the nourishing food disappears in the fire to prepare them for the Lent.

Maslenitsa ends on the first day of the Lent – Clean Monday, which is considered the day of purification from sin and food forbidden during fasting.