The following is an interview with Rashid Tussupbekov, Chairman of the Agency on the Fight against Economic and Corruption Crimes (Financial Police). 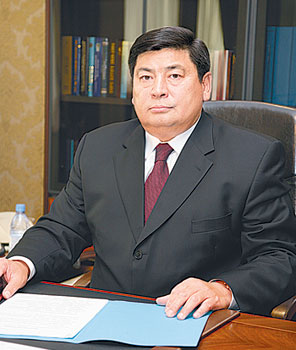 What main objectives did the Financial Police seek last year?

Last year was an intense and a busy one for the Financial Police. We had to radically change repressive mentality, used to be based on pursuit of performance indicators and feeling of imaginary superiority, which had been formed over many years and become inherent in all law enforcement agencies, including the Financial Police.

We determined the strategic objectives of the Agency as strengthening the prevention of corruption instead of sweeping accusations of corruption. We prioritized the suppression of its systematic and organized forms and counteraction of the shadow economy, avoiding groundless interference with businesses.

In order to successfully reach these tasks, the Agency radically revised criteria for evaluation of the activity of the Financial Police from quantitative to qualitative.

However, we continue to work identifying and investigating crimes, but detecting crimes, which are of organized and systematic nature, and cause significant harm to the interests of citizens and the state, was determined as the priority.

Taking into account new strategic objectives, as well as a new system of evaluation of the activity of the Agency, can we say the Financial Police was reformed?

Over the years of independence, Kazakhstan has created the optimal structure of law enforcement agencies, legally demarcated their functions and competencies, and minimized the options for alternative jurisdiction.

Work on improvement of activity of the Financial Police has been done.

Record-registration discipline has been put in order. Electronic registration of claims and reports was introduced for the formation of objective statistics on crime. Facts of concealment from crime reporting were uprooted.

Legal procedural decisions in criminal matters, which have been motionless for a long time, have been adopted. This allowed for restoration of the rights of hundreds of citizens.

Duty investigation groups have been established, in which the investigator gives legal assessment of the applications and reports.

In order to improve quality of investigative work, the principles of ‘police’ investigation have been introduced.

In December last year, I signed a new Instruction that enhances the status of the investigator, as a leading figure in the pre-trial criminal process.

Last year, the certification of law enforcement officers was held. Upon the outcomes of the attestation, the Financial Police has seen more personnel changes then in other bodies. What is the reason for that?

Indeed, the certification has become a challenge and test of professional and moral fitness of our employees. The senior management of the Agency was renewed by 85%, the middle rank management – by 27%, and the rank and file personnel – by 6.5%. High standards and conceptual attitude of the members of the Evaluation Commission led to such a high percentage of turnover of the staff. This applies particularly to the management.

You have said the fight against corruption must begin with your own staff. What has been done in this area?

In 2012, we identified 21 corruption offenses committed by our employees. These figures do not determine the level of corruption in the financial police, they point to the growth of the detection of such crimes. We are not going to hide these facts because of the unwillingness to spoil our performance reports and lower “esprit de corps.”

In June 2012, I signed an order which established the principle of personal responsibility of the administration for discipline among the subordinates. In accordance with the instructions of the President, a new concept of law enforcement personnel policies is being developed aimed at creating a “new generation” of law enforcement officers.

Earlier, the financial police was often accused of putting pressure on businesses. How would you describe current situation?

We set a goal of becoming one of the main defenders and allies of law-abiding businesses. I declared a moratorium on inspections of businesses, except for the subjects of the shadow economy, and citizens occupied in implementation of projects financed from the state budgets.

As a result, the number of inspections of entrepreneurs was reduced by two fold. And, as a result, there have not been any unfounded complaints towards financial police at the “Presidential Protection of Business” web page.

Moreover, we can talk about the growing reliance of entrepreneurs. They address us with complaints on the activities of government officials more often. Last year, we initiated 307 criminal proceedings against officials of the regulatory and inspection bodies for illegal interference in businesses, which was 1.5 times more than in 2011.

In his annual state-of-the-nation address to the people of Kazakhstan, the President instructed to dramatically step up the fight against corruption.

What goals have you set for employees to combat corruption?

A Specialized Situation Centre has been established at our Agency which is based on information contained in databases of government agencies and other public sources. It reveals the structures and schemes of criminal ties, and finds the relationship of subjects. It allows us, without leaving our working places, to detect potential crimes analytically at early stages and to prevent them from happening.

After our intervention, about 31 million tenge was saved in other several areas where state authorities also intended to purchase goods at inflated prices.

In addition, we have developed a “corruption risks passport” for each region with the definition of the most corrupt sectors and departments, to ensure their enhanced operational support.

At the same time, I ordered to put an end to the pursuit of mass numbers. We should work for not showing off, but in order to carry out deep developments and identify organized and systemic corruption schemes that cause billions of dollars worth in damage to the state.

The President ordered to improve anti-corruption legislation. What legislative changes would you suggest?

We are currently developing new versions of the Criminal Code and the Criminal Procedure Code, and our Agency is actively involved in this work.

We offer, in addition to imprisonment for bribery, to establish a new penalty in the type of a fine, calculated by multiplying the amount of bribes.

If a person within a certain time does not pay the fine, the amount of which will exceed ten times the received bribe, he or she will be liable for imprisonment with confiscation of his or her property. We also offer to limit legally the size for the cash funds of legal entities, defining the limit sufficient for economic activities.

Uncontrolled mass of cash creates favourable conditions for the development of the “shadow” economy, corruption, extremism and terrorism financing.

In 2012, Kazakhstan’s entities cashed 1,680 billion tenge, and this figure has a tendency of annual growth. The proposed measure will lead to significant tax revenues to the state budget, disrupt the basis of corruption and complicate the financing of terrorist and extremist groups and organized crime.